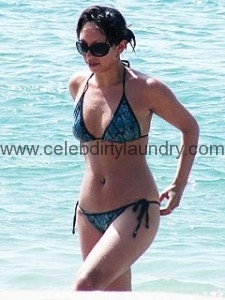 Last October, Cheryl Burke defended her curves when bloggers slammed her for gaining weight. But new photos of the Dancing with the Stars beauty in St. Lucia should silence any critics.

Fresh from a Caribbean vacation with her boyfriend, model Maxwell Zagorski, Burke, 25, tells PEOPLE that shedding the pounds and maintaining “the ideal weight for me” has been relatively simple.

“I gained a few pounds and everybody was talking about it last year,” the two-time Dancing champ says. “But taking it off was simply a matter of doing a bit more cardio to supplement my dancing. I’m also making sure I eat clean foods and healthy snacks.”

She attributes her healthier diet to Zagorski. “He’s a much better cook than I am and it helps when we eat meals together that are healthy as opposed to going out for dinner, which I did a lot when I was single,” says Burke.

Since finishing second with partner Gilles Marini in Dancing’s season finale last month, Burke has been keeping busy by making press appearances and getting ready to attend her mother’s 55th birthday celebration in Mexico.
On Friday night Burke will celebrate the grand opening of her third Cheryl Burke Dance studio, in Mountain View, Calif. Over the summer she’ll be working on designs for her line of fitness wear and wants to develop a line of casual workout shoes.

“There’s this huge explosion of things that have happened in my life in the past three years and I’m so grateful,” Burke says, noting that best of all, more people than ever before are taking up dancing.

“People are seeing that it’s a great alternative to going to the gym,” Burke says. “It’s a great way to do something really healthy for your body and you don’t even know it because you have so much fun doing it.”