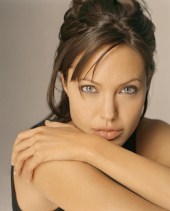 The 34-year-old actress would play the lead role in a reimagining of the film entitled ‘Maleficent’, which would re-tell the classic tale from the perspective of the evil fairy who casts a spell on the princess which eventually sees her sleep for a hundred years.

‘Alice in Wonderland’ director Tim Burton – who is famous for his gothic movies – is also rumoured to be involved with the film.   The screenplay is being written by long-time Disney collaborator Linda Woolverton – who worked on ‘The Lion King’ and ‘Beauty and the Beast’.   Angelina is currently shooting ‘The Tourist’ with Johnny Depp in Venice, before she records the voice of Tigress in animated sequel ‘Kung Fu Panda: The Kaboom of Doom’.   The Oscar-winning beauty’s next movie, action thriller ‘Salt’, will hit cinemas in July and August.