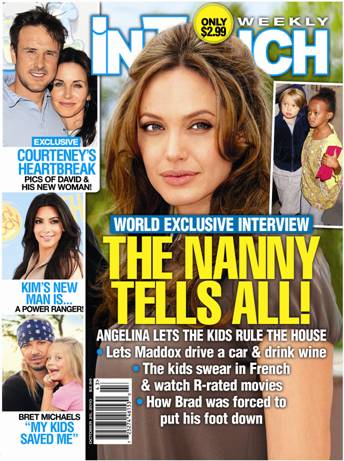 Far from the big happy family that Angelina Jolie and Brad Pitt frequently describe, the Jolie-Pitt home is more chaotic than anyone could ever imagine. “The children rule the household and are always running around like monsters,” the insider tells In Touch.

If the kids are running wild, Angelina has no one to blame but herself. “She’s a disciplinarian on certain things, but she is extremely liberal in other ways,” a friend shares. “Angelina doesn’t make anything taboo.”   Not only does she allow her six kids to watch R-rated movies — and repeat the salty dialogue — Angelina also allows them all the junk food they want.

“No matter what, the kids get their way,” says the source. And as they grow older, that’s bound to get worse.   If Brad and Angelina don’t start laying more ground rules at home, the insider shares, their family life will only get even more “out of control.”

Nice story but really… one has to ask the question – would In Touch have bought the story from the nanny if it was a nice story about a happy family?  Probably not……   So how true is this?