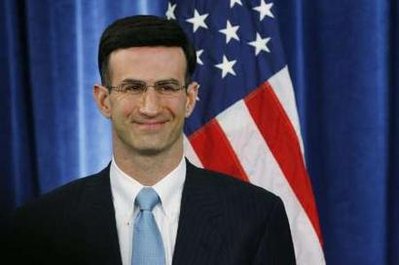 Presidential advisers say Orszag’s two most likely successors as director of the Office of Management and Budget each served as chief economic adviser to President Bill Clinton: Laura D’Andrea Tyson of the University of California at Berkeley, named by Obama as a member of the President’s Economic Recovery Advisory Board; and Gene Sperling, now a counselor to Treasury Secretary Tim Geithner.

Tyson would provide the economic team with an effective spokesperson on television. And she’d add gender diversity at the top of the administration, especially if Christina Romer, chair of the White House Council of Economic Advisers, becomes president of the Federal Reserve Bank of San Francisco, as expected. Obama has nominated the current president, Janet Yellen, as the Fed’s vice chair.

An outsider is unlikely to get the job, the officials said. One possibility would be Robert Greenstein, director of the Center on Budget and Policy Priorities. Jack Lew, Deputy Secretary of State for Management and Resources, was also mentioned, but held the job under Clinton, and so in considered unlikely to want to go back.   To read the rest of this story visit Politico