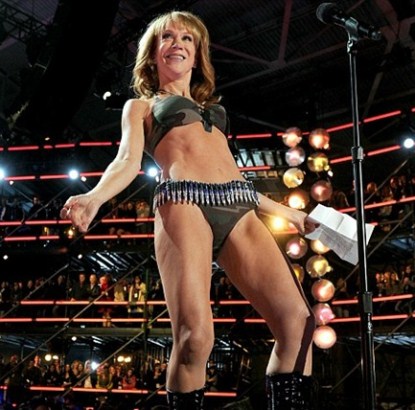 Kathy Griffin, 50, stripped down to a bikini while performing at the VH1 Divas Salute the Troops concert Friday night took some pot shots at Bristol Palin saying she was fat and talking about DWTS.   “She’s the only contestant in the history of the show to actually gain weight.”    Check out the video of her opening monologue after the jump

Kathy did not care that the troops booed her she just kept on. “She gained like 30 pounds a week, I swear to God, it was fantastic. She’s like the white Precious.”

Bristol of course has responded to the comments by saying:

“The audience’s reaction to this ‘comedian’ spoke volumes, and the decent people I know would probably have booed her, too. I hope people didn’t have to pay money to hear her negativity and criticisms.”

I have said it before if I were Bristol I would think twice about goading comedians.  Now she has done it to not one but two.  Just imagine what Margaret and Kathy could do in their future standup shows Bristol could be the brunt of a lot of their jokes.