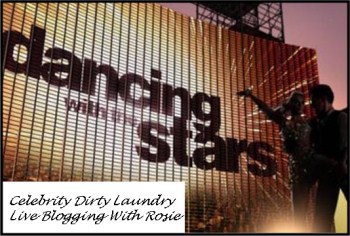 Last week was the most anticipated, most talked about, most watched Dancing With The Stars season premiere ever – over 39 million people watched.

Shannon Doherty and two time winner Mark Ballas dancing the Jive, in the rehearsals this poor girl struggles so much that it makes us believe that there is not much hope. But surprisingly, Shannon pulls it off! Len said her legs could have been sharper and she needs to work on the finesse. Bruno thought it was much better, but she needs to keep her toes on the ground more. Carrie Anne said it paid off. Overall, she had a great improvement. Scores: Rosie: 7 Bruno: 7 Carrie Anne: 7 Len: 6

Aiden Turner and Edita Sliwinska dancing the Fox Trot. I hoped all week that my favourite sexy soap star would get better and my prayers were answered! Aiden was dashing and sexy. Edita looked nice in pink, but the dress was a little weird looking. Bruno said that he could see a glimmer of hope for Aiden but there were a lot of sticky moments. Carrie Anne said nice job compared to last week. Len said it was a little economic in the movement but there was an improvement. Aiden definitely should get extra marks for extreme sexiness! Scores: Rosie: 7 Bruno: 6 Carrie Anne: 7 Len: 6

Evan Lysacek and Anna Trebunskaya dancing the Jive. Carrie Anne said it was great, she was beaming! Len said he was happy, he thought they did it very well even considering the silly stuff. Bruno called them “Grease Lightening” but told them to be careful not to be too wobbly. I think they did a very good job, but the routine was boring. Scores: Rosie: 7 (for boring routine) Bruno: 8 Carrie Anne: 8 Len: 8

Niecy Nash with Louis Van Amstel dancing the Fox Trot. Niecy looked absolutely stunning in pink, she should give Edita tips on gown design! Len, said it had musicality, ease and a sassy twist, he called Niecy a revelation. Bruno said it was nicely done, like a strawberry milkshake. Carrie said Niecy was spectacular but needs to give a little bit more. I thought they were fantastic. Niecy’s personality is infectious and her dancing was graceful. Scores: Rosie: 8 Bruno: 7 Carrie Anne: 7 Len: 7

Jake Pavelka and Chelsie Hightower dancing the Jive .In practice Jake said he feels stupid, dah, he’s been on that road since the Bachelor! Jake’s outfit is as nerdy and stupid as he is. Chelsea did a good job making up for all his shortcomings. Bruno said Jake wanted it really badly, but he really needs to work on precision and technique. Carrie Anne said they did a lift and we all know how that pisses her off! Len said that Jake was a little heavy but thinks he has a lot more to give. Blah Blah. I just can’t stand the guy since he picked Vienna. Scores: Rosie: 6 Bruno: 7 Carrie Anne: 6 Len: 7

Buzz Aldrin and Askly Costa dancing the Fox Trot. Buzz said he didn’t get this far by lolly gagging through life and tonight he is going to give it his best. Great start, one of my favorite songs, “Fly Me to the Moon” and how appropriate for Mr. Aldrin. Carrie Ann said it was very tender and charming, although Buzz looked like he was afraid of stepping on Askly’s toes. Len said he won’t try to even criticize a legend, ‘well done you inspired everyone’. Bruno said the man on the moon got stuck on the Fox Trot; it looked like Buzz was stuck on craters. Shame on you Bruno! At least Carrie Anne and Len had class. Scores: Rosie: 6 Bruno: 4 Carrie Anne: 4 Len: 4. Let me correct myself, shame on all of you for the pathetic scores – Buzz and Askly were graceful and classy.

Nicole Scherzinger and Derek Hough dancing the Jive. The Pussycat bimbo came on the dance floor with her spray tan still wet! Len said that parts were fantastic but they needed to do more that satisfied his traditional taste. Bruno was so excited, I thought he was going to pee his pants. Carrie Anne said it was perfection. Oh please, the woman dances for a living – what did they expect, the same kind of dancing as Shannon or Buzz! Apparently Nicole struggled with the music, really… was it because Rihanna sings better than her! Scores: Rosie: 7 Bruno: 10 Carrie Anne: 10 Len: 8. The marks are not fair at all – the viewers are the voters and I am sure they are going to give the bimbo the boot soon enough.

Erin Andrews & Maksim Chrnerkovskiy dancing the Fox Trot. The ‘funky monkey’ flows onto the dance floor with elegance and grace. Maksim looks ever so sexy and loads us up with the eye candy. Bruno said that Erin was a natural. Carrie Anne said that she was a lyrical dancer but she has to not hold on for dear life. Len said the movement was fluid but the footwork wasn’t too clever. Erin gave a huge blow to Maksim’s ego by saying she was holding on so tight because she couldn’t find his bicep! Scores: Rosie: 9 Bruno: 8 Carrie Anne: 8 Len: 7

Pamela Anderson and Damian Whitewood dancing the Fox Trot. Pamela was sexy & sultry in Old Hollywood Glamour, her dancing was graceful and best of all, she looked like she was a having the time of her life. Tom Bergeron said ‘I don’t know what the judges are going to say but a bus load of Kennedys just drove up’. Carrie Anne said that Pamela brought Marilyn back to life. Len said it had an elegance about it and a cheeky charm although Pamela has to get her bust away from Damian. Bruno called it delicious; he said he could feel the waves our sensuality enveloping him and the nation. Scores: Rosie: 9 Bruno: 8 Carrie Anne: 7 Len: 7

Chad Ochocinco with two time champion Cheryl Burke dancing the Fox Trot. Cheryl has to get some help with her costume choice, just what the heck was stuck to her right boom, a boomerang!. Len said it was terrible and clumsy, like the snow, you are glad when it is all over. Bruno said Chad looked uncomfortable and needs to refocus. Carrie Anne said he has great potential but he needs to understand his movements. Sadly, Chad has potential but tonight, he sucked. Scores: Rosie: 5 Bruno: 5 Carrie Anne: 6 Len: 5

Kate Gosselin and Tony Dovolani dancing the Jive. Poor Kate, she really was terrible. I like her, but she looked like a freightened deer in the headlights. Bruno said that Kate turned the song into a nightmare, like a Stepford Wife. Carrie Anne said the she was proud that Kate made it through the whole routine. Len said that nerves were getting the best of Kate and don’t go down as a wimp, go down fighting. While waiting for the scores, Kate cringes when she says that they have to ‘communicate like a marriage’, lol, this is why I like her so much. Scores: Rosie: 5 Bruno: 5 Carrie Anne:5 Len: 5

What was with all the celebrity & dancers’ tantrums during rehearsal? Do they  think we are stupid? Yeah, everyone but Buzz had a tantrum, give me a break! I predict it will be between Kate and Chad tomorrow night, both were equally clumsy and uncoordinated on the dance floor tonight.  One last thought, before DWTS I had never heard of Brooke Burke and now I know why. She is boring, her personality sucks and she looks like a mirror ball trophy. I think they should replace her next season with Niecy, that would spice up the show! Then poor Brooke can go back to doing what she does best, not being famous! Rosie xoxoxo