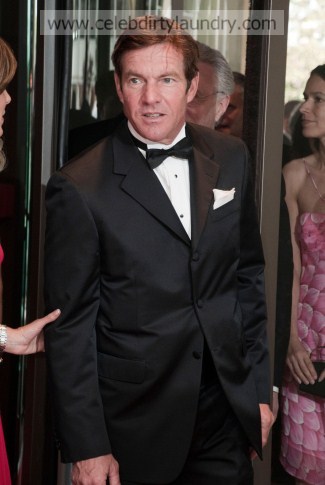 A negligence suit obtained by RadarOnline.com reveals the Dennis Quaid and his wife Kimberly Buffington blame the pharmaceutical company because the labels on the vials of the drug were “easy for medical personnel to confuse”.

The suit also noted the life-threatening reactions the twins experienced “may be permanent in nature and are likely to cause serious complications in the future”.   Quaid insists Baxter Healthcare should have been aware of “the danger of inadvertent mix-up with the dire consequences that could follow and should have taken other steps to warn and to distinguish each of these drugs”.

The ‘Far from Heaven’star is now seeking medical expenses, general damages, unspecified damages, attorney’s fees and a jury trial.   His now two-year-old twins, Thomas Boone and Zoe Grace, were just two weeks old when they received the accidental overdose in 2007.   The tots were left fighting for their lives after being administered with 10,000 units of the anti-coagulant drug, rather than the 10 units babies are allowed.   In 2009, Quaid and his wife received $500,000 from Los Angeles’ Cedars-Sinai Medical Center, as well as an agreement the hospital will provide future medical care for the twins if they suffer from any condition related to the accidental overdose.  Photo: Fame Pictures