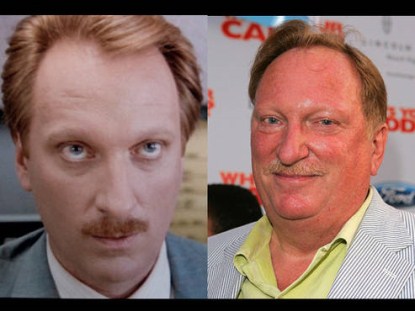 And doesn’t he just look the part too!  After being caught in 2003 in possession of child pornography as well as being convicted of hiring a 14-year-old lad to pose for indecent images, Ferris Bueller’s Day Off star Jeffrey Jones was sentenced to 5 years probation and ordered to register as a sex offender every year thereafter.  Somehow, the perv managed to forget to register this year and was arrested on June 10, 2010 since he failed to register on September 28th, 2009, his birthday.

Jones was released on $20,000 bail and sentenced this September 26 to 250 hours of community service cleaning up the roadside in Los Angeles County.  Can you imagine seeing that slob in overalls with a tripod picking up cans and paper waste as you are buzzing by the freeway?  I’ll tell you, everything we know about these child molesting types is that they rarely reform, rather they continually re-offend.  This is why authorities are so correct in insisting on a strict application of the sexual offender registry – at least authorities are aware when these people are up and about so to speak as long as they are registered.  If they fail to register then the community upon which they prey has no warning, no notification, no way to protect themselves from these predators who can and do destroy children’s lives merely to satisfy their own warped desires.  These deviants are lucky enough to be allowed back into society but by refusing to comply with the law they demonstrate a compete lack of concern for others as well as displaying a total disdain for law and order.  250 hours of roadside cleaning is a very light sentence for Mr. Jeffrey Jones.  Remind me to stay away from anything he is in, that is for sure.