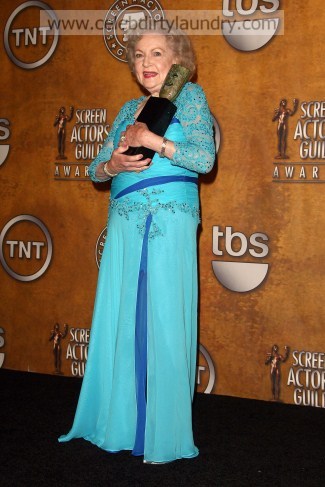 Via PopEater as if you weren’t already aware, Betty White is awesome.   While accepting the Lifetime Achievement Award at the SAGs on Saturday, the 88-year-old Hollywood legend spoke of her wildly impressive career in showbiz and relished in all the people she’s met over the years.   In doing so, she introduced a little blue comedy to the mix. "I actually know many of you and I’ve worked with quite a few," she recalled. "Maybe had a couple. And you know who you are."

The hilarious quip was progressed by one of her hundreds of past cast-mates, George Clooney, who revealed a "fling" with the icon. "In 1987, I did an episode of ‘The Golden Girls’ and I would like to thank Betty White for her discretion," adding: "a friend of mine told me she was a bobcat in the sack."   Missed Betty’s Speech?   Visit   PopEater to see it.  Photo: Fame Pictures