Is Erin Barry The Other Women Behind Eva Longoria and Tony Parker Divorce? 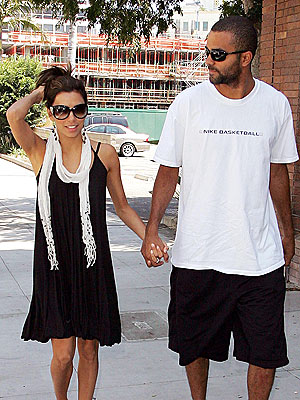 Eva Longoria, 35, and Tony Parker who were married in June 2007 called it quits this week!   The twosome filed for divorce citing irreconcilable differences.  However things are never so straight forward in La La Land.  It is being reported that Tony Parker was carrying on with another women.  The woman in question was his former San Antonio Spurs team mate Brent Barry’s wife Erin Barry.  Coincidence or not –  Erin is in the midst of a divorce from her husband and she was the one who filed.

Sports Illustrated staff writer Bryan Armen Graham took to Twitter a short time ago to break the news.  “Have it on good authority from entertainment sources that ‘former teammate’ in Tony Parker-Eva Longoria affair is Brent Barry,” Graham wrote, adding the Barrys are also going through a divorce.  RadarOnline.com has confirmed the couples had a strong relationship and were friends before Longoria and Parker’s seven-year marriage imploded, amid allegations that he had been cheating on the Desperate Housewife’s star.

In Hollywood till death do us part seems to be left out of the marriage vows.  If he did not want to be married to her why didn’t he just divorce her and move on rather than have her humilated in the public with his affairs.  How long will it take for a few more mistresses to pop out of the woodwork?