Jesse James’ Friends Furious With Him For Cheating On Sandra Bullock 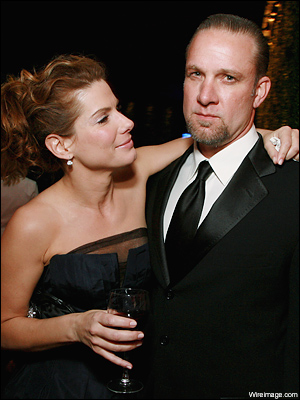 The motorcycle, Jesse James enthusiast has begged forgiveness from Sandra Bullock his wife of nearly five years for his alleged affair with tattoo model Michelle ‘Bombshell’ McGee, but those close to him feel deeply let down.

A source told website RadarOnline.com: “I’m sure Sandra’s gonna be leaving him after this. I know he’s begging her for forgiveness, and I know he feels awful. He really does love her but he’s just a pig.   “Of course all these biker guys are the same. I been hanging with them for years and they all mess around with dirty chicks – the dirtier the better – so I shouldn’t be surprised. Looks like the end of marriage number three for Jesse, and that’s really sad.”   The friend also launched an attack on heavily tattooed model-and-stripper Michelle – who reportedly received $30,000 for her kiss and tell story of her alleged affair, which she claims lasted 11 months – with Jesse, branding her a “tramp”.

Meanwhile, revelations have surfaced about Michelle’s private life, with her ex-husband alleging she is bipolar and a drug user in court papers relating to their divorce and battle for custody of their son, Avery.   In the court declaration, filed in January this year, ex-husband Ronald Shane Modica said: “It seems as the years go by Avery’s mother slips more and more into stripping, pills, alcohol and performances she does online, pornography, that she has brought into her home.   “There have been pornographic shoots there and live Web cam pornographic broadcasts from her house.”  Michelle has preciously claimed in court papers that Shane was violent towards her and obtained a temporary restraining order against him on February 22, 2008.   He maintains he has never threatened or harmed his ex-wife.