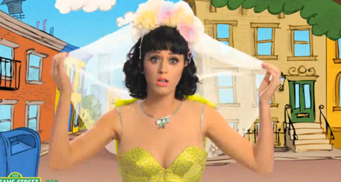 Katy Perry filmed a segment for the Sesame Street in which she performed a modified version of her track ‘Hot N Cold’ with red puppet Elmo.    A clip of the track was posted on YouTube sparking numerous complaints the low-cut yellow dress Katy was wearing revealed too much cleavage and was unsuitable for younger viewers resulting in bosses cutting the scenes.

On hearing the news, Katy tweeted: “Wow, looks like my play date with Elmo has been cut short!”   Katy’s fiance Russell Brand also took to his twitter page to comment on the decision.   Parodying the famous announcement at the end of each ‘Sesame Street’ episode which reveals which letters and numbers featured in the day’s programme, Russell wrote: “Today’s ‘Sesame Street’ will NOT be brought to you by the number 34 or the letter D. (sic)”

He also made another post parodying the show’s theme tune, saying: “Can you tell me how to get, how to get to Sex-with-me Street? (sic)”  In response to complaints from parents, ‘Sesame Street’ producers released a statement clarifying the clip will not be included in the TV show.

It read: “‘Sesame Street’ has always been written on two levels, for the child and adult. We use parodies and celebrity segments to interest adults in the show   “In light of the feedback we’ve received on the Katy Perry music video which was released on YouTube only, we have decided we will not air the segment on the television broadcast of ‘Sesame Street’, which is aimed at pre-schoolers. Katy Perry fans will still be able to view the video on YouTube.”

Stars in Court: Judge Their Fashion!  Too Fab