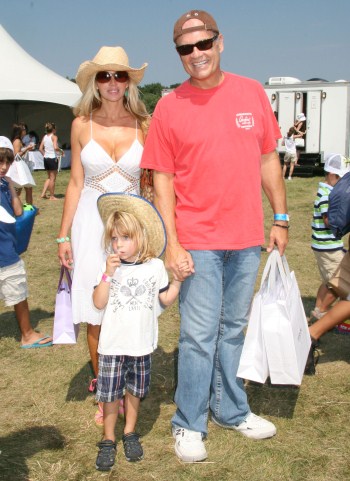 ‘Frasier’ star Kelsey Grammer– who has been married to former Playboy model Camille Donatacci since 1997 – confirmed the pair would be parting ways, marking the end of his third marriage. He wrote on his twitter page yesterday (01.07.10): “Hello everyone thank you for ur support and Yes it’s TRUE Camille and I are Divorcing I ask U 2 respect our privacy in these difficu… (sic)”   The 41-year-old model has reportedly cited irreconcilable differences as the reason for the split.

A representative for the couple – who have two children together, Mason Olivia, eight, and Jude Gordan, five – confirmed the split, asking for their privacy to be respected.   The rep’ said: “Kelsey and Camille value privacy. They understand that private lives sometimes get played out in public but ask on this occasion that their privacy – and the privacy of their children — be respected.”
According to gossip website TMZ, Camille is requesting joint legal custody, and primary physical custody, of the children, as well as spousal and child support.

Kelsey, 55, recently admitted balancing work and family life was often a struggle.   He explained: “I’m always concerned about going to work now because I’ve established such a connection with my family that’s different than it used to be when I was on ‘Frasier’.   "I started the family then and in the last five years I’ve spent a lot of time with them. So I find that more precious than I did before… it’s very important that the work not really intrude on that. So it’s a weird balancing act again."