Kirsten Dunst Talks About Her Rehab Stint In Blackbook Magazine 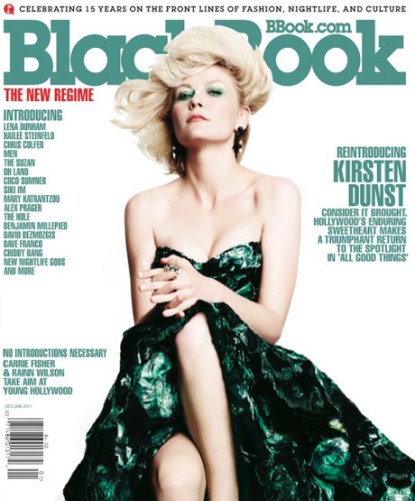 Kirsten Dunst who checked herself into Utah’s Cirque Lodge three years ago to be treated for depression is on the cover of Blackbook December 2010/January 2011.  In the interview Kirsten talks about her new film role which she filmed right after leaving rehab, her reputation, and her struggle with depression.

On her new film role: “She related to her character, Katie, being “torn down.”  “I know what it’s like to lose yourself, to no longer know the difference between right and wrong, I was ready to play something like that. I had been living life on the surface, emotionally, and I was feeling really vulnerable, so I was prepared to do anything at that point.”

On checking into rehab in 2008 to deal with depression: “My friends and family were put in a position where they had to defend me, and it was an awful time… On a personal level, I would talk to anybody about it, but not on a public level. If I do that, then the next person feels like they can ask me about it, and the person after that, until everyone then feels entitled to ask me about it, and that’s not coming from a good place.”

On her reputation:  “When you’re a single girl in your twenties, yeah, you go out with your friends. And sometimes you drink too much,” she said. I don’t know anybody else, with any type of job, who doesn’t do that.”