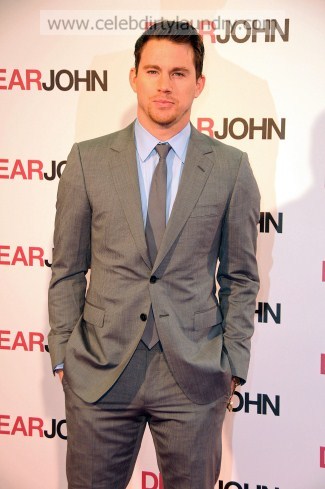 The 29-year-old actor says his penis – which he burnt the skin off while trying to keep warm when shooting ‘The Eagle of the Ninth’ in the Scottish Highlands last October – has made a full recovery from the agonising injury and suffered no permanent damage.   Speaking at the UK gala premiere of his new film ‘Dear John’, Channing told BANG Showbiz: “My penis is doing well. I burned it very badly but thankfully there was no scarring and is working well. I’m back on top – literally!”

As a former stripper, Channing – who previously described the injury as "the most painful thing" he had ever experienced – places great importance on his manhood, especially as he wants to strip off on camera.   He said: “I’d love to go back to stripping, but only for a film. I want to make a movie highlighting my experiences as a stripper.”

Thanks to his good looks and hunky body, Channing – who is married to his ‘Step Up’ co-star Jenna Dewan – has become a Hollywood pin-up but says he doesn’t feel the pressure of being a sex symbol.   He said: “I’m happy with my looks and what my parents gave me. I don’t feel like an object because only you can make yourself feel like an object.”  Photo: Bauer Griffin