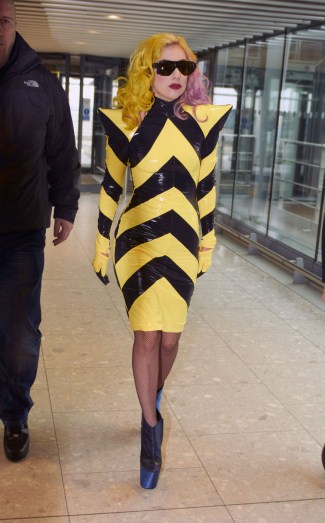 Lady Gaga  who caused a stir with a lesbian kiss in her controversial ‘Telephone’ video, was honoured at the 21st Awards show on Saturday night (05.06.10) both for her music and for promoting equality and increasing the visibility of the LGBT community.

Gaga beat her friend ‘American Idol’s Adam Lambert, as well as Brandi Carlile, The Gossip and Otep, in what was the final instalment on the GLAAD Awards in San Francisco – after two ceremonies earlier in the year were held at New York and Los Angeles.

Other big winners included Lee Daniels, the gay director of ‘Precious: Based on the Novel ‘Push’ by Sapphire’, who revealed that he had overcome huge issues with his sexuality since his youth.   He said: “I come from a world where I was beaten daily by my dad because of my gayness.   “I had bullies and I wanted to kill myself.”

Cybill Shepherd won the Golden Gate Award for her portrayal of lesbian Phyllis Kroll in ‘The L Word’, accepting the accolade from her two daughters.   She said: “We stand on the shoulders of our elders and I want to thank everyone who’s worked so hard to make this possible.   “I’m very humbled and I don’t know that I could be more dedicated to this cause, but I could never thank you enough, GLAAD, for your education of me.”   Also in attendance were country singer Chely Wright, and Australian dance singer Sam Sparro who performed.