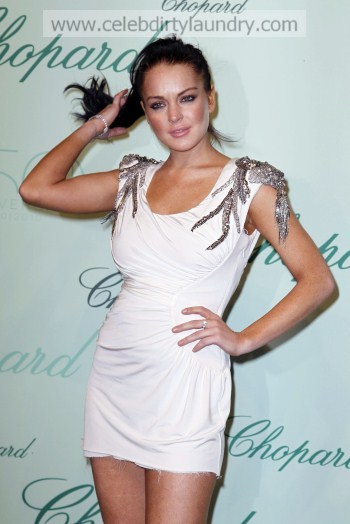 Lindsay Lohan will not make it to court Thursday – her lawyer, or shall we say her LIAR, Shawn Holley, claims that Lohan’s passport was stolen during the Cannes Film Festival and that she will be applying at the embassy for a new one Thursday. Tell me – if you pay a lawyer enough is there any lie they won’t attest to as the truth?

Superior Court Judge Marsha Revel ordered Lohan, 23, to appear in a Beverly Hills courtroom for a progress report on her probation stemming from two arrests in 2007.   Revel will be able to issue a bench warrant for Lohan’s arrest for missing the hearing Thursday and this is standard procedure when someone skips a court date. Lohan has been on probation since pleading guilty in August 2007 to two misdemeanor counts of being under the influence of cocaine and no contest to two counts of driving with a blood-alcohol level above 0.08 percent and one count of reckless driving. Lohan has repeatedly struggled with the terms of her sentence.   In October, a judge extended her probation for another year but a prosecutor warned the actress she was facing jail time if she violated her probation. Well folks, she has really violated her probation this time!

Did Lohan do this – go to France against the odds of making it back in time – just for more publicity?   She is a D list talent at best and I guess she figures that any publicity is better than no publicity at all.