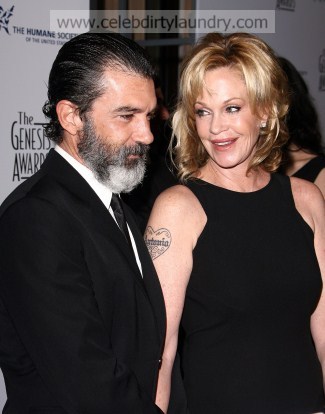 Actress Melanie Griffith – who spent three months in Utah’s Cirque Lodge rehabilitation centre last summer for preventative treatment – got through the programme with the support of her actor spouse Antonio Banderas and their family, including their 13-year-old daughter Stella.

“The whole family took part, Stella included. I was there three times a week at a stretch, and we participated in group therapy with our daughter. It strengthened our relationship in many ways. We participated very directly, all of us. Melanie’s son and daughter Alexander and Dakota were there, as was her ex-husband Don Johnson’s son Jessie and Melanie’s mother, actress Tippi Hedren, too.“I just wanted the mother of my children, my wife, to get better. We had no reason to hide anything. At the same time, being open helps people in the same circumstances not to be ashamed.”

Last summer’s visit was the 52-year-old actress’ third stint in rehab, with Melanie previously being treated for addictions to alcohol, cocaine and painkillers.  The visit was a preventative measure taken after she became nervous of using prescription medication to treat a knee injury she sustained in a skiing accident.

Antonio – who wed Melanie in May 1996 – explained to Britain’s Hello! magazine:

“That has a very simple explanation. She hasn’t touched alcohol for years. As far as prescription pills go, she had a skiing accident in Aspen – I was there, we were skiing together – and she tore all the ligaments in her knee. She had an operation two hours after the accident, and had two operations over the next year. They had to give her painkillers. For someone who has been an addict, it was like falling into the same hole again, and Melanie was the one who decided to get treatment. “Melanie said, ‘This isn’t good. When I finish with the rehabilitation for me knee, I’m going straight to Cirque Lodge for 90 days so I can reinforce my determination to stay clean.’ And that’s what she did. But it wasn’t because she was running around popping pills.”