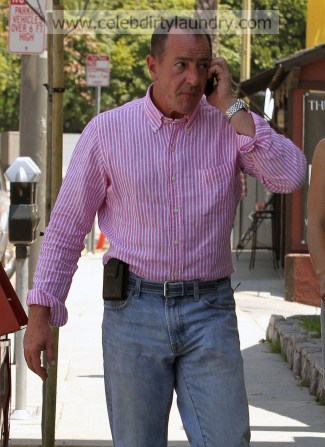 Michael Lohan – who has repeatedly claimed Lindsay Lohan his daughter is addicted to prescription drugs – supports the bail conditions imposed on his daughter by a Beverly Hills court yesterday (24.05.10), which see her having to wear the SCRAM device, attend alcohol education classes and submit to random drug testing.

He told Life and Style magazine: "I’m in favour of anything that keeps my daughter out of jail and helps her with her substance-abuse problem.   "I still contend that the prescription drugs are her major problem.”   Lindsay is also required to remain in Los Angeles under the conditions of her probation, despite attempts from her lawyer to have the restrictions changed so she can work.   Her lawyer Shawn Chapman Holley asked Judge Marsha Revel: "I’d like to make the court aware of a couple of things and an alternate suggestion. Miss Lohan has a number of upcoming photo shoots and she’ll be continuing to film a movie in Texas. The SCRAM device would interfere with all of that. Miss Lohan is not, however, getting out of being monitored. For that reason, our alternative suggestion is that she be randomly tested for drugs and alcohol."

However, the judge ruled: "She needs to submit to random drug testing here, not in Texas. I want no excuse for her to say it’s random when it’s not… I’m afraid she’s going to have to delay filming for now."   A formal hearing to determine if the 23-year-old star has violated her probation – which she was placed on following her second driving under the influence (DUI) conviction in 2007 – has been scheduled for July 6.   If she is found in breach of the terms, Lindsay – who is expected to face at least five drug tests before then – could be jailed for 180 days.   Photo: Fame Pictures