Mickey Rourke Had Sex With 14 Women In A Night 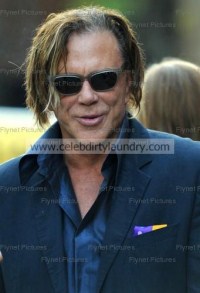 The 57-year-old actor claims he managed to entice multiple women into his bed during a marathon evening out in London.   Mickey – who referred to the cheating antics of Cheryl Cole’s husband Ashley Cole – told British interviewer Lizzie Cundy: “Forget Ashley Cole, his behaviour has nothing on a film star. Soccer players’ wives and girlfriends get an easy time – they should try living with Hollywood hell raisers.   “I once spent a weekend in the UK and had 14 women in one night.”

Ashley was recently dumped by his pop star wife following allegations he cheated on her with several different women.   Mickey, who is a regular on the London clubbing scene, was not specific about when the lovemaking marathon happened, but added: “If you wives and girlfriends knew what Hollywood’s stars get up to you’d think you were married to pussycats.”

The ‘Wrestler’ star, who is currently dating 24-year-old Russian model Anastassija Makarenko, was seen partying in the British capital last September and was linked to a string of different women.   However, he has since settled down and has described Anastassija as a “gift from heaven”.   Earlier this year, he said: “Obviously she’s a very beautiful woman. She’s a gift from heaven. But she’s got the biggest heart, she’s got a great family, she’s really close to her mother and father – they’re great people.   “I wouldn’t trade her in for 20 Academy Awards.”   Photo: Fame Pictures