Nicollette Sheridan is suing the ‘Desperate Housewives’ creator for $20 million, after alleging assault and wrongful termination 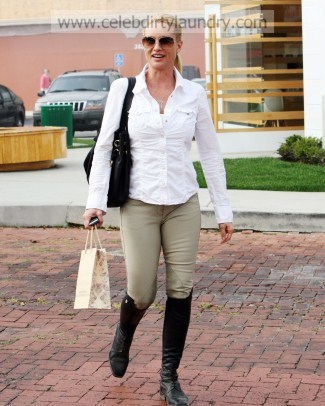 Nicollette Sheridan is suing the ‘Desperate Housewives’ creator for $20 million, after alleging assault and wrongful termination.   The 46-year-old actress – who portrayed maneater estate agent Edie Britt in the US show – filed a lawsuit against TV executive Marc Cherry at the Los Angeles Superior Court yesterday (05.04.10) which claimed she was hit in the face by him in September 2008 and then sacked after she complained.

She is also suing for battery and gender violence and the legal documents claim her dismissal resulted “in her losing millions in future earnings”.   According to the lawsuit "Cherry took her aside and forcefully hit her with his hand across her face and head” when Nicollette queried a line in the script.   After the actress walked off to her trailer, the producer apparently ran after her to “beg forgiveness”.

Nicollette claims she was sacked from the programme after she reported the incident to ABC Studios – who produce the series with Cherry Productions, which is owned by the 48-year-old writer-and-producer.  The lawsuit also states how Nicollette apparently tried to meet with the show boss in 2008 to “discuss his negative demeanour towards her and to discuss whether he had a problem with her work".

The blonde actress’ departure was announced in February 2009, and she was killed-off from the programme in series five, when her alter-ego died in a car accident.   Discussing her departure, her lawyer said: "It is exceptionally unusual for a popular character to be killed off or written out of a television series unless the actor has requested to be released from his or her contract.  "The decision to kill off Sheridan’s character demonstrates that Cherry and ABC intended to and did retaliate against Sheridan for her complaints about Cherry… None of the female characters had ever before been killed off or written out of the show."   A spokesperson from ABC Studios said: "While we have yet to see the actual complaint, we investigated similar claims made by Ms. Sheridan last year and found them to be without merit."  Photo: Fame Pictures