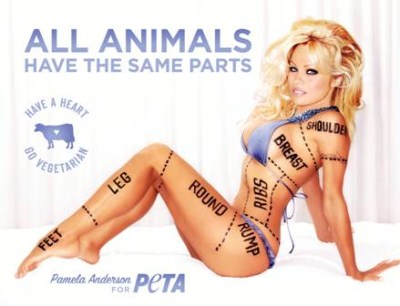 Pamela Anderson flew into Montréal, all set to unveil her new vegetarian campaign for PETA today, only to be denied a permit for the event at the last minute by city officials who are claiming that her ad is sexist.

"In a city that is known for its exotic dancing and for being progressive and edgy, how sad that a woman would be banned from using her own body in a political protest over the suffering of cows and chickens. In some parts of the world, women are forced to cover their whole bodies with burqas—is that next? I didn’t think that Canada would be so puritanical."

Adds PETA Senior Vice President Dan Mathews, who will be in Montréal with Anderson for the unveiling, "I think that city officials are confusing ‘sexy’ with ‘sexist.’"

In the ad, Anderson’s nearly naked body is covered in paint markings that mimic a butcher’s diagram—her flesh is marked "breast," "round," and "rump"—and the caption reads, "All Animals Have the Same Parts. Have a Heart—Go Vegetarian." Anderson will now be unveiling her campaign at Restaurant Globe at 11 a.m. on Thursday as part of a news conference for the Just for Laughs Festival, for which Anderson is hosting a gala on Thursday evening. Anderson is a long time defender of animals and outspoken slaughterhouse critic who believes that if you have to save animals’ lives by undressing yourself, so be it.