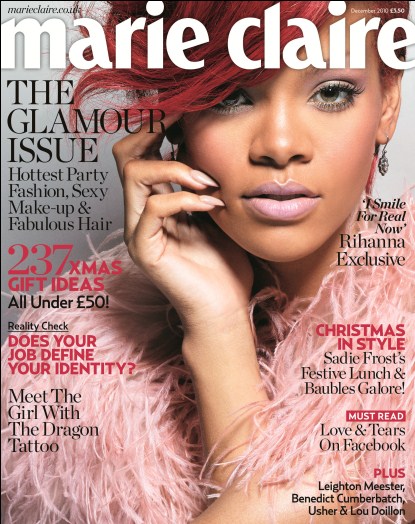 Rihanna  is the December 2010 cover girl for Marie Claire UK December 2010.  In the interview she talks about Eminem, gets emotional during the interview whilst talking about surviving the Chris Brown experience and about the person she has become now.  Below are some of the highlights of the interview:

About being a different person:  ‘I was very lost. I have to say I felt really confused. It was really strange because…’ Her eyes begin to well up then she scolds herself for being upset. ‘Aaagh!’ she exclaims outloud. ‘I hate talking about it but it was really crazy because I felt so out of touch with myself and when that happens…’  It’s just this one empty vase. I felt like an empty vessel.’  Tears fall down her face but she tells me it’s alright. ‘I’m just… I feel like… I smile for real this time.  ‘Eventually, I remember waking up one day and I knew I was over it. One day.  I remember I was in New York at the Trump Hotel and I woke up and I just knew I was over it.

About her apprearance with Eminem and the critics:    Rihanna has no regrets. ‘He [Eminen] confronted himself on it. He basically gives insight into what goes on in the mind of a couple in a domestically violent relationship. I love that in every verse it just gets to that point where she wants to leave, she wants to leave, she leaves, she leaves, she leaves…  but then the hook always comes back and it’s like, “I love it. I love it.”. That’s not what you think when it’s happening. You know you don’t like it but you’re staying, so it’s almost like you must love it because you’re not leaving.’Did she relate to that on a personal level? ‘Absolutely. Absolutely! Every word in that song is true. It would take somebody who’s been on the inside to understand how magical those lyrics are. Everybody loves the song but the lyrics can never hit home until you’ve seen it, witnessed it, in your home or experienced it yourself.’

To read more of the interview visit Marie Claire UK.