Survive Survivor Nicaragua With Us – CDL Reviews The Premiere! 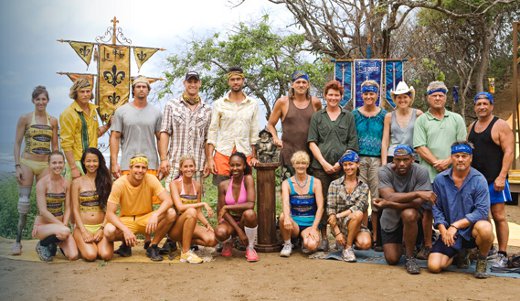 Survivor Nicaragua premiered tonight.   There are two teams named La Flor & Espada. The La Flor Tribe is made up of any one 30 and younger and the Espada Tribe is made up of the ‘oldies’ at age 40 and over.   Celebrity Dirty Laundry reviews tonight’s show from the dual perspective as it happens – youth represented by 25 year old Robyn and maturity represented by 51 year old Jody.

The two teams have to find the Medallion of Power which is not an individual reward. People are scattered everywhere looking for the medallion of power finally Brenda, 27, won the medallion of power for the 30 and under team the La Flor Tribe.   The Medallion of Power can be held on for later use or traded for fire/flint and fishing gear. As a tribe they must decided what to do.   The young team makes the first bad decision they take the fishing gear and flint/fire.   I can already tell I am not going to like Jimmy Johnson, 67.   Jane,  the Dog Trainer is amazing she has already got a fire going for the older team Espada.

OMG La Flor tribe Alina & Kelly find the immunity idol and they are so stupid they laugh with each other and say “Oh we found it, but we don’t understand it!”   Jimmy Johnson is very stressed. He thinks he can motivate everyone – he says “he can help someone win one million dollars.” Bla bla – shut up please…

Finally the first Immunity Challenge – The Medallion of Power gives the older team an advantage of power during challenges.   There is one catch if they use it they have to then give it to the younger team. The older team opts to keep the Medallion of Power and not use it.   The younger team win immunity and they deserve it. The older tribe lost and deserved to lose. It was an easy puzzle to do and they were disorganized and confused.

It looks like Jimmy Johnson is not fooling many of them. James “Jimmy T” Tarantino is trying to convince the team to vote out Jimmy and I believe that is a great idea.  However, Jimmy Johnson is trying to convince everyone to get rid of the Goat Farmer Wendy.   If they are smart they will dump Jimmy fast he looks like a real pain in the butt, a big mouth and a manipulator.

OH No! Wendy wants to tell the group one thing at The Immunity Challenge  “I can be very honest, people trust me , they like me and I don’t have any blisters on my feet”  I think this was a big mistake and may actually get her voted off!

The wise choice would be to keep the Medallion of Power – because there is nothing amazing about fire and fishing tackle and the organizers of the show usually set things up so that a competent team has the ability very early on to provide for itself.   The young team chickens out and the Medallion of Power goes to the oldies and the younguns decided to take the fishing gear and fire/flint.   Wendy, the goat rancher seems stupid.   Her husband thinks she will be the first one voted off and so do I!   The young people are both screwing up and simultaneously displaying typical youthful arrogance.  They are making the assumption that their youth somehow confers an unbeatable advantage over the obviously wiser more experienced older Espada.

Already Kelly the one legged medical student has decided to play the handicap pity card by showing everyone her stump.   Of course most of the rest of her team in an effort to be just so politically correct immediately have to give her high fives but…..I strongly suspect as soon as the chips are down they will turn on her like a pack of wolves.

Jimmy Johnson is already showing his age.   Chase Pro Race Car Jackman on La Flor is already on the make and Brenda, 27,  is his first target you know what they say – when the Weiny wakes good Sense Vanishes.   The coach Jimmy Johnson is a giant blowhard. As soon as his team lost the immunity challenge we heard him saying that it wasn’t the end of the world – however for one player on his team it is the end of the world.   The coach is proving to be an irritating moron and in face voting him off would be appropriate!

I think Wendy’s speech made a good case.   After Wendy speech that clearly showed why she should be kept alive she was summarily and almost unanimously voted out. Clearly Espana and I do not think alike!