Taylor Swift To Perform A Song For Kanye West At The VMAs? 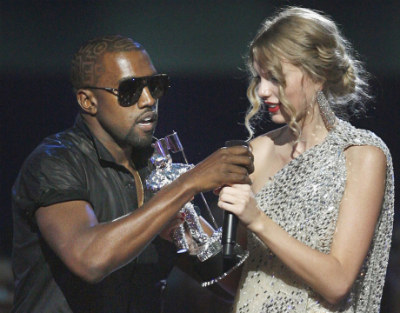 Remember last year’s Video Music Awards when Kanye West drank way too much and stormed the stage during Taylor Swift’s acceptance speech? Well, he apologized and she said that she wanted to put the whole thing behind them.

Now, we’re hearing that T-Swizzle is set to perform a song for Kanye at this year’s VMAs. Oh, this is going to be good!

We’ve heard rumors that this is a song that she wrote this year about the whole stage hijacking incident last year. He even said he wrote a song for her, so maybe we’ll be lucky enough to hear both songs tonight.

Remember last year what being shellshocked on the stage did for Taylor’s career? She basically went from country obscurity to mega-superstar in no time! Stay tuned to see what they’re going to do tonight!

Do you think they’ll perform together?!??