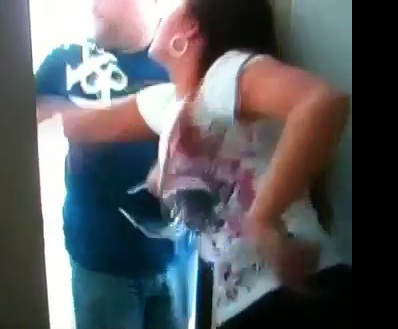 Teen mom Amber Portwood, 20,  plead not guilty today to charges of beating the crap our of her ex-fiancé Gary Shirley. Portwood was formallt charged with three Class D felonies– 2 counts of domestic battery and one count of Neglect of a Dependent – as well as one misdemeanor charge of domestic battery yesteday.    Some of the attacks were caught on video – we have it below. She was also arrested yesteday and is in jail in Indiana.

Radaronline further reports: A judge entered the not guilty plea on behalf of Portwood, 20, who did appear in court Tuesday for her arraignment in Anderson, Indiana. She remains in custody on $5,000 bail and is expected to be released later Tuesday pending her next court appearance.

Maybe this is the wakeup call that will make her realize she has an anger management problem.  I am not sure why she plead not guilty since some of the attacks were caught on video.