Tell it to the judge! Jersey Shore’s Vinny Giving Up law school? 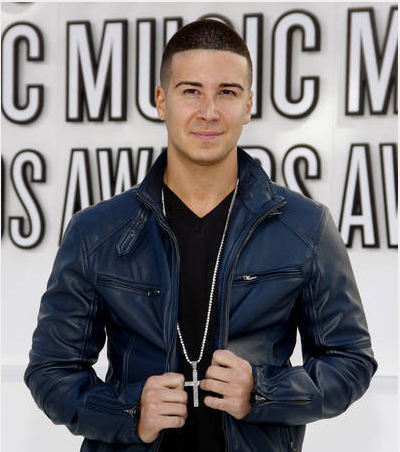 Never say that Vincent Guadagnino limits his expectations or confidence in himself.   The apparently massively well endowed Vinny from Jersey Shore claims he is a college graduate having attended the very average ranked SUNY (New Paltz) for 2 years and then transferring to the much lower ranked CUNY CSI (College of Staten Island) when he couldn’t hack it at SUNY!   That would be okay – not even worthy of mention or comment except that Vinny says that he was planning to take the LSATS and apply to law school and had hopes of getting into Harvard or Yale!  F ortunately Vinny didn’t experience the pain of rejection since his plans were interrupted by his winning a role on the first season of Jersey Shore.   Now that the show is in its second successful season and the Vinster is rapidly becoming a household name we don’t expect him to return to his former academic calling anytime soon.

The most incredible fact of all is that Vinny says that he was worried that he was possibly too smart, too brainy, to fit comfortably on Jersey Shore.  He says that when he was called in to the show he warned them about his college education and that he was not going to dumb himself down to fit in.  What a joke – what pomposity!  I finally did the chore of watching Jersey Shore for the first time last weekend – the episode where Vinny’s Mom and Uncle Gino visit the house for a big dinner- and let me assure you that Vinny is NOT too smart, in fact he does not appear to be as clever as The Situation, and that is pretty bad since Mike ‘The Situation’ is not exactly a da Vinci by any stretch.

The news is that Playgirl offered Vinny 30k to get a look and picture of his supposedly oversized member – sadly we did not hear about any law schools contacting him and offering entrance to their programs.  We think that somehow Vinny is best off sticking to acting and “modelling,” besides, once he gets even more famous his chances of actually getting accepted to any law school will go up appreciably.  Perhaps someone should have taught good old Vinny the adage that “it’s better to keep quiet and be thought a fool than to open your mouth and remove all doubt.”  After all, it takes a rare combination of hubris and dim-wittedness to brag about how you ‘would have’ gone to law school and that you are perhaps too smart to fit in on a reality TV show.  Vinny fits right in perfectly on Jersey Shore – he in no way stands out at all for either his wit or knowledge – but I fear that in any decent law school he would be right down there at the bottom of the class.