The Food Network’s “The Opener” Needs To Close! 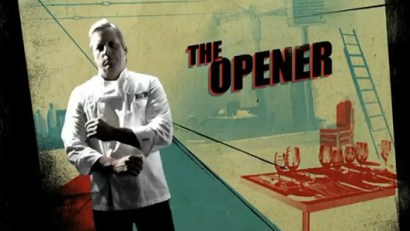 The Food Network’s The Opener is a big disappointment.  Tonight [9.01.10] we decided to tune in to the debut since we generally love cooking shows and are especially fond of Chef Ramsey and his contentious show style – which The Opener proclaimed itself to be.

David Adjey – restaurant consultant and former personal chef to actor Dan Aykroyd is “The Opener” but sadly he has little to offer.   The show is a total rip-off of Ramsey’s Kitchen Disasters, except that where Ramsey is charismatic and intelligent, Adjey it is whiny and irritating, more like a repetitive, sulky high school principal than a power chef leader. Adjey has zero charisma or authority in the kitchen, or outside of it.   If you are going to copy another’s idea then at least do it well! Perhaps even take what they do and expand upon it – that might be acceptable. And you should be entertaining; at least then people will be willing to downplay the blatant idea rip-off, because they enjoy the show.

But here in the season opener, on the debut, the show that makes or breaks a season, we were treated to a pair of Dixieland spoiled brats whose fathers gave them money to open an Italian restaurant after paying for them to travel to Italy and experience the cooking and food there. Okay – but these boys had no idea how to operate a business, or restaurant for that matter, and frankly, Adjey “The Opener” seemed to not have a much clearer idea either.

He kept ranting “this is not a kibbutz, you need a chef, you need a hierarchy.”   Well, we in the home audience needed a break from whiny Adjey who was more concerned with looking for agreement and trying to find common ground with these incompetent losers then what he should have been doing, which was simply taking charge! Now Chef Ramsey might be a bit over the top, but that is why we love him.  He never hesitates to risk failure in order to spare the feelings of his hosts — he tells it like it is and demands that the owners and staff of the restaurant he is fixing obey him.

Adjey needs to spend at least a month learning from Chef Ramsey – then maybe he can work as a backup on a show – he does not have what it takes nor the charisma to carry a show on his own.

We are sorry to say that Celebrity Dirty Laundry can not recommend The Opener.   It is a lame rip-off that adds nothing to Chef Ramsey, nor does it come close to matching up with his work.

Article first published as The Opener Needs To Close! on Technorati.