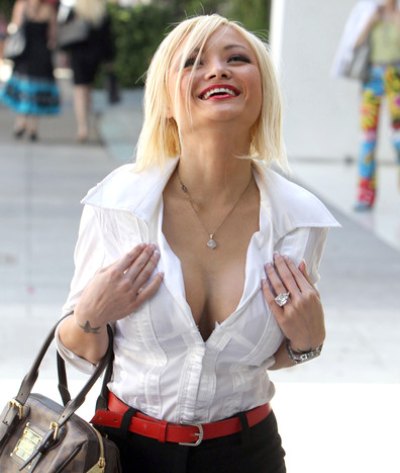 In case you spent the last few days hiding under a rock, then you may have missed the royal beatdown that Tila Tequila suffered at the hands of the Juggalos. Some nefarious promoter got her to perform at the Gathering of the Juggalos on Thursday in Cave-In-Rock, Illinois. Needless to say, the many juggalos that showed up were not fans.

Tila was urged many times by fans and foes alike, to stay away from the stage. She was told that the juggalos in attendance were in no way fans and that they intended to hurt her. She didn’t heed the warnings and now she’s suing the event organizers because she was beaten black and blue.

If someone ever gave me the courtesy of a warning of an impending butt kicking, I’d heed their advice. Instead, this media midget goes on stage and shows her boobs to the crowd. Unimpressed and as promised, they laid into her. I’m not saying it’s right by any stretch of the imagination, but she was warned.

She says that she got a glimpse of the guy that threw a rock at her face, causing her biggest injury. She said, “These weren’t fans or people that are like, ‘Let’s embarrass her and boo her off stage’, but looking at these people, or monsters, whatever they are, they looked very angry and violent.”

After being stitched up, Tila was told to stay out of the sun for a year (?!???What?!?!??) Her attorney is handling the assault, she added, “He’s taking care of that and we have all our witnesses together, and I’m hoping this is the last Juggalos gathering they’ll ever have. Because it’s been such an underground type of concert and I’m glad that I could bring this to the mainstream and expose them for what they do to people and women and that it’s not okay.”

Obviously Tila doesn’t own a computer or use the internet? A simple Google search shows that the Juggalos aren’t exactly a friendly crowd. On another note, ICP4Eva, yo.