Twilight’s Stars To Get Big $$$$$$ For The Final Two Movies 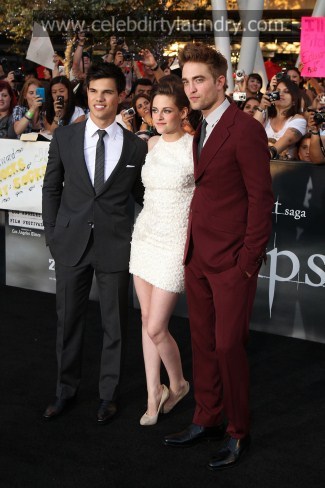 As well as the enormous sum, Robert Pattinson, Kristen Stewart and Taylor Lautner will also receive a share of the gross profits which could bring their total pay to $41 million. Nymag.com reports that “Summit will pay stars Kristen Stewart, Robert Pattinson and Taylor Lautner each a whopping $25 million against 7.5 percent of the theatrical gross for starring in the next and last two ‘Twilight’ movies, ‘Breaking Dawn’, parts one and two.”

The studio behind the movies Summit Entertainment re-negotiated the stars’ contracts earlier this year after deciding to split Stephenie Meyer’s final ‘Twilight’ book ‘Breaking Dawn’ into two movies.   The third film ‘The Twilight Saga: Eclipse’, which has just been released, sees Robert as vampire Edward Cullen, Kristen as his human girlfriend Bella Swan and Taylor as werewolf Jacob Black reprise their roles.

Meanwhile, ‘Breaking Dawn’ screenwriter Melissa Rosenberg has revealed the last two movies in the series will be “sexier” than the previous three.   She said: “‘Breaking Dawn’ will be sexier. I think we can get awfully sexy with a PG-13, I’m not worried about the rating.”