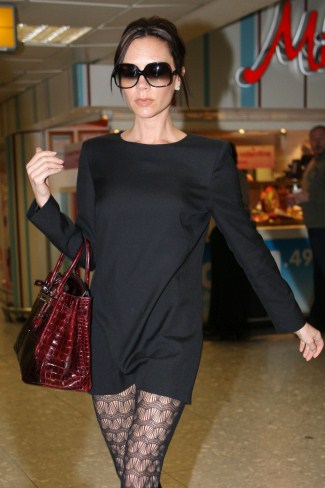 The singer-turned-fashion designer briefly dated the ‘Lost Boys’ star in 1995, and was saddened to receive news of his shock death yesterday (10.03.10) of a suspected prescription drug overdose.

A source told The Sun newspaper: “Victoria hadn’t had any contact with Corey for years but she was still shocked to learn of his death in such circumstances."   The overdose – which happened at the Los Angeles flat Corey was sharing with his mother while he helped her battle breast cancer – is thought to have been an accident, with four bottles of prescription drugs reportedly found near the spot Corey died.

The actor had previously openly admitted addiction to crack cocaine and prescription drugs.   Meanwhile Corey’s friend and co-star in ‘Lost Boys’, Corey Feldman, was stunned by the news because he saw his pal just days ago and he was upbeat.   He said: “He was fine. He was actually giving me some advice about something I was very upset about. He was being very positive."
Feldman also said that while he was touched by the outpouring of sentiment that has followed his friend’s death, he is also upset that more people didn’t support him while he was alive.
Speaking on US TV show ‘Larry King Live’ he said: “Where were all these people the last 10 years?   There were all these people to lend a handout, to reach out to him and say, ‘You’re a legend, you’re an amazingly talented wonderful person who’s never really gone out of his way to hurt anyone, other than himself?’   "In this entertainment industry, in Hollywood, we build people up as children, we put them on pedestals, and then, when we decide they’re not marketable anymore, we walk away from them."   Photo: Flynet Pictures