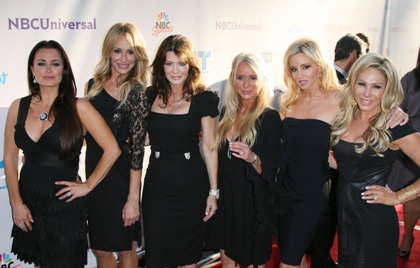 ‘The Real Housewives of Beverly Hills’ premiered on Bravo last night and it’s no secret that many tuned in to see how a recent tragedy would be incorporated into the reality series. Just a month ago Russell Armstrong (who was separated from Taylor Armstrong) committed suicide. Many wondered how his death would factor into the already tapped season, since the show is known for its ‘Melrose Place’ style back-stabbing and “oh no she didn’t” moments.

Following the suicide Bravo execs rushed to re-edit specific moments, such as Taylor’s revelation that she’d like to spice tings up with her estranged husband. A post suicide sequence was filmed specifically for the season opener, which showed “Housewives’ cast mates discussing the Armstrong’s death and coming to the conclusion that “Life goes on. It has to.” While the moment seemed generic its hard to imagine this type of show effectively capturing somber.