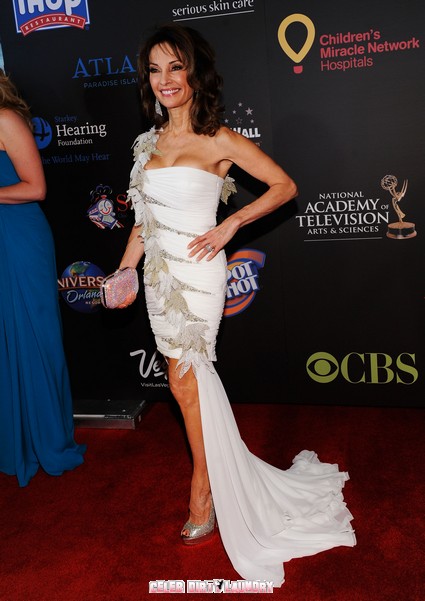 The 38th annual Daytime Emmy Awards are being broadcast from the Las Vegas Hilton hotel casino in Las Vegas, Nevada Sunday June 19th, 2011.  Pictured above is Susan Lucci one of the stars of All My Children.  The Daytime Emmy awards is  a prime time event for television honoring daytime’s best with non-stop entertainment, guest star surprises and exciting award presentations.  Comedian/television personality Wayne Brady has been tapped by CBS to host the show.   Brady — the host of CBS’ daytime game show “Let’s Make A Deal” — will share the stage with the best in daytime television.

The Children’s Miracle Network Hospitals is the official charity of “Daytime Gives Back,” an independent philanthropic initiative of the daytime television community. Daytime Gives Back is showcased each year as a highlight segment during the Daytime Emmy Awards television broadcast.   The stars have started to hit the red carpet and we of course have all the red carpet arrival pics for you below.  Pictures include: Heather Tom, Tracey Bregman, Jennifer Gareis, Susan Lucci, Bobbie Eakes, Marlee Matlin, Anderson Cooper, Debbi Morgan, Kelly Monaco,Wayne Brady,Rebecca Budig, Christopher and Kyle Massey, Vanna White, Alicia Minshew,Kristian Alfonso.  Keep coming back because we will be adding more pics as we get them.  Enjoy!