Adam Sandler Receives His Star On The Hollywood Walk of Fame 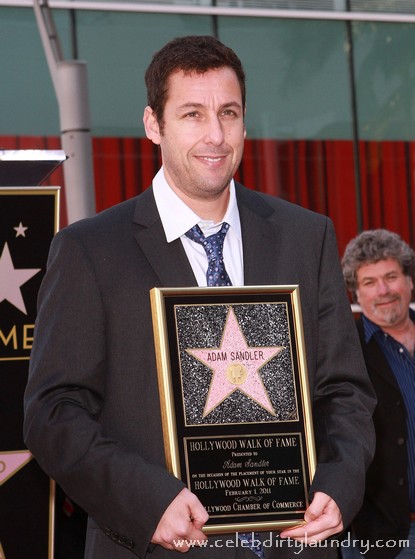 Adam Sandler, 44,  with his wife Jacqueline Samantha Titone, and his two daughter’s Sadie and Sunny is honored on the Hollywood Walk of Fame and receives his star during a special ceremony in Hollywood. Los Angeles, California February 1st, 2011.  The cutest moment of the ceremony was when his daughters grabbed the mike and said “I Love My Daddy”   ahhhhhhhhh  Adam got serious for a moment and said the best thing that ever happened to him was meeting his wife, Jacqueline, and reiterating that family is the most important thing in his life.

Meanwhile Adam will be seen February 11th, 2011 in Just Go With It.  The movie is about a man who enlists the help of a woman and her kids to land the woman of his dreams.  The movie also stars Jennifer Aniston who Adam recently said he was shocked by her wit and Jennifer Aniston.