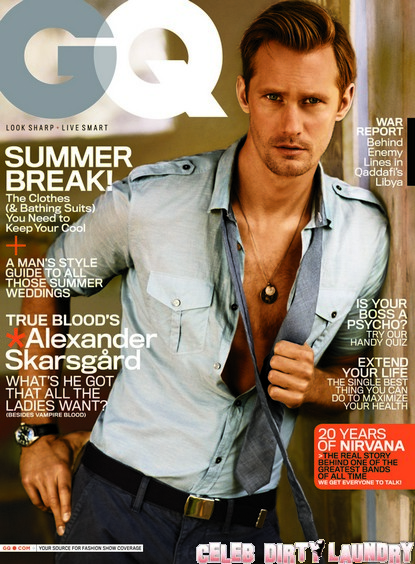 True Blood‘s delectable Alexander Skarsgard, 34, graces the cover of the June 2011 issue of GQ.   The cover advertises Alexander Skarsgard, ‘Whats he got that all ladies want.’ No mystery on that question with his handsome good looks, amazing body and devilish charm Alexander is one of the hottest actors out there.  Alexander plays Eric Northman in True Blood,  a 1,000-year-old vampire who presides as the ‘sheriff’ of a district in Louisiana.  He started off as a minor character and now is one of the major romantic leads.

Below are a few highlights of the interview, the issue hits newsstands May 24th and you know I will be running out to buy a copy.  To check out the rest of the interview visit GQ.

On his dad, Stellan, who’s also an actor: “I don’t think I came to acting to compete with my father. But, you know, he wasn’t around as much as normal dads, and seeing his passion … Maybe it was a way to get his attention. I mean, if anything, we’re trying to take care of him. He’s over the hill.”

On the love scenes with Anna Paquin – who is married to their True Blood co-star Stephen Moyer: “t’s really clear to Steve and to everybody else what the deal is—which is that Anna is like a sister to me… Those love scenes take quite a bit of acting, actually. A lot of acting.”

On life in L.A. and the entertainment industry: “Hollywood can be like kids playing marbles on the schoolyard. Everybody wants the shiny marble until one kid says he doesn’t. Then nobody will touch it. So it’s important that I make good decisions now.”

What’s next for Alexander?  Well he will be seen in Melancholia, set to premiere in Cannes acting alongside his father and then the remake of the classic Sam Peckinpah movie Straw Dogs and next year in Battleship board-game-based movie.  Don’t forget to tune in next month for the premiere of Season 4 of True Blood to see what Eric is up to this season! 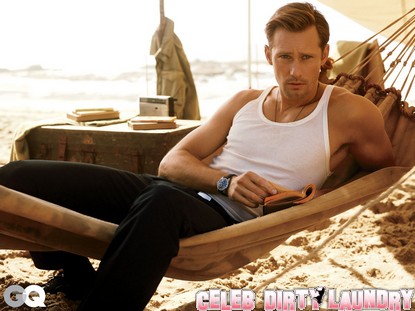