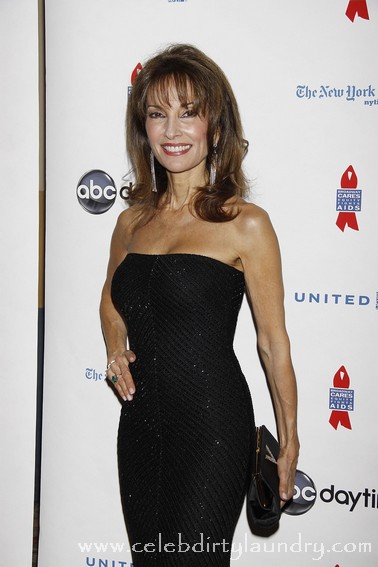 Susan Lucci has expressed hope that the hit soap ‘All My Children’ will escape the axe from bosses at ABC.  Susan Lucci, the American actress who releases her new memoir today says that ‘All My Children’ may continue if the show keeps receiving support from ‘passionate’ fans.

Speaking on Good Morning America this week, Lucci said that the show had received a number of supportive messages from fans after it was announced that it could face the axe.  The 64-year-old, who won a daytime Emmy for her role as ‘Erica Kane’ on the soap, said, “We’ll see, as long as we have these loyal, passionate fans in our corner … we just received a letter from the vice president in charge of finance congratulating us on what great shape we’re in”

The show has experienced declining ratings in recent years and many other daytime dramas are struggling to obtain the same audiences they received in the 1980’s and 1990’s.  Meanwhile, Susan Lucci is currently on tour promoting her new book ‘All My Life’, in which she documents her personal life throughout the years.

According to publisher Harper Collins, she also tackles darker subjects such as “the childhood guilt she harbored over the death of her dear grandmother, the car accident that nearly took away her career and her eyesight, her newborn son’s life-threatening illness, coping with her husband’s cancer, and the pain of miscarriage”.

At least fans can read all about Susan even if the show gets cancelled.