Arnold Schwarzenegger Mobbed By His Fans In London – Photos 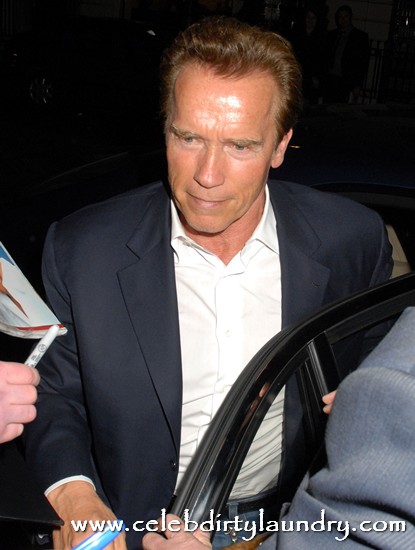 Arnold Schwarzenegger was mobbed by his fans as he arrived at his hotel London, England today March 31st, 2011.  Arnold is in London to team up with Mayor Boris Johnson for a promotional campaign aimed at boosting sports participation in the capital heading into the 2012 Olympics.  The major said ” we can’t all be Mr. Universe, but we can all be a bit more active.”

Meanwhile, Arnold has gotten his own comic book.  Arnold teamed up with Stan Lee for a new comic book series titled The Governator.  Entertainment Weekly has the scoop:

“The Governator is going to be a great superhero, but he’ll also be Arnold Schwarzenegger,”  “We’re using all the personal elements of Arnold’s life. We’re using his wife [Maria Shriver]. We’re using his kids. We’re using the fact that he used to be governor. Only after he leaves the governor’s office, Arnold decides to become a crime fighter and builds a secret high-tech crime-fighting center under his house in Brentwood.” Along with the Arnold Cave, the Governator will have a fleet of super vehicles at his disposal, a closet full of “Super Suits” that allow him to fly and perform other super stunts, and a team of colorful sidekicks, such as Zeke Muckerberg, the precocious 13-year-old computer whiz who acts as the Governator’s cybersecurity expert. Naturally, there will also be recurring supervillains — including an evil organization called Gangsters Imposters Racketeers Liars & Irredeemable Ex-cons (or G.I.R.L.I.E. Men, for short). For Schwarzenegger, the cartoon is obviously the next best thing to being President. “I love the idea of a control center below my house with a path so that boats and submarines can go right into the ocean,” he tells EW. “In the cartoon, my house is much closer to the beach than where we live, but, you know, it’s a cartoon.”