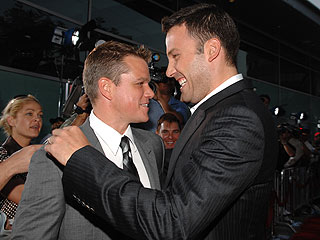 Ben Affleck and Matt Damon are reuniting for a major movie based on the life and crimes of Boston’s most famous underworld figure of the last century – James ‘Whitey’ Bulger. Whitey managed to attain a public persona with Robin Hood style cachet but of course the reality was far different – Whitey was in fact a brutal murderer, drug dealer, extortionist, and worst of all in the criminal world, a complete rat who was an FBI informant for over 20 years!

Ben and Matt won the Oscar for Best Original Screenplay for the 1997 film ‘Good Will Hunting’ which they co-wrote and starred in.

Damon will play the notorious criminal, while Affleck will direct the project as well as starring in it. The pair will co-produce the movie under their Pearl Street Films banner.

Damon told GQ magazine: “We’re doing a Whitey Bulger movie. There are a couple of competing movies and I don’t think it’s been announced yet that we’re doing it.”

“But the sooner it’s announced the better, just because everyone else will back off, hopefully. I’m really excited about it.”

‘Boardwalk Empire’ creator Terrence Winter is writing the script, while Casey Affleck will have a role in the film. Production is due to begin on the project next year.

After working as an FBI informant for years, Bulger – who is accused of committing 19 murders – went on the run in December 1994 after being tipped off he was about to be arrested for an indictment under the RICO Act.

He remained on the run for 16 years before being arrested at the age of 81 along with his long-time girlfriend Catherine Greig in June 2011 in Santa Monica, California.

The film will tell Bulger’s story from his youth and incarceration on Alcatraz through to his rise to power as an underworld boss and his secret life as an FBI informant.