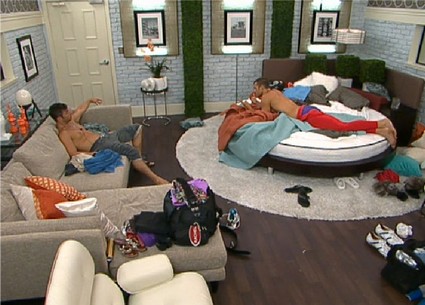 If you are watching Big Brother 13 this season you know that the drama in the Big Brother  13 house has already started.  Yesterday we posted that Evel Dick Donato had already left the house for personal reasons.  Evel Dick has already posted some things on his personal twitter account and indicates he will be releasing  a statement soon.  “I will be releasing a public video statement on @RTVZone in the next couple days concerning my departure from the Big Brother House.  But to squash the rumors, I am not in jail, don’t have cancer, my mother son and girlfriend are not in the hospital & I was not kicked out.”

Rachel and Brendon are the first HOH’s and if you don’t want to know who has been nominated don’t read any further.  On the chopping block this week are Porshe and Keith.  On the live feed we can see Keith and Porsche’s keys are missing from the memory wall so this confirms it.  I am betting Porshe will go home since it seems the whole house despises her.

At the POV which is hosted by Adam, Jeff, Jordon, Brendon and Rachel, Keith and Porsche are the players.   Adam, Keith and Dominic talked in the candy room about how they are going to get Brendon and Rachel out the first chance they have. And Porsche walks in so Adam asked her if she was HOH next week who would she put up? She responded by asking a question…. Can you put up your own partner? (Keith was sitting right there, way to play the game Porsche!    (you see what I think she is a goner)

Brendon and Rachel won the POV leaving them with way too much power this week and putting a target on their backs.

Who will go is still up in the air, it seems likely that it will be Porsche but as they say “expect the unexpected”    Last I saw Brendon and Rachel are thinking of changing the nominations, so you never know.  Who do you think will be eliminated?

Further speculation is if they will bring another former house guest back to replace Evel Dick.  Who would you like to see come back?

Are you disappointed Evel Dick is gone? Have you come across any theories about why he left?