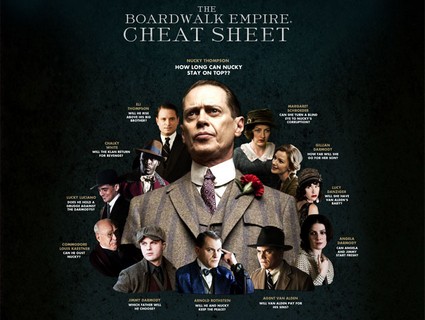 Tonight on HBO Boardwalk Empire returns with Season 2.  Season 1 of the show won eight Emmy Awards.   If you did not watch the first season Boardwalk Empire is set in Atlantic City in the 1920’s at the dawn of prohibition.  The head of the city is Nucky Thompson who is played by Steve Buscemi (The Sopranos) a political fixer, background dealer and a gangster.

The show starts giving us the flavor of the season with a lot of flipping with random scenes.    We start out at the warehouse where Chalky White is supervising the moving of the crates.  They open the door and the KKK starts shooting on the warehouse.  Many people are killed in the warehouse.  Chalky is still alive and members of the klan dressed in white hoods come in with shotguns and they hold a rifle to Chalky.  A women comes from in back of a still and shoots the clan member before he can kill Chalky.  Chalky is saved but the Klan member shoots the women.  The KKK runs and Chalky shoots one.

Over to Margaret and Nucky comes home.  Margaret is having problems with her son who does not want to go to school.  Her son tells Nucky that the nun hit him with the ruler on his hands and he is upset.   Margaret is upset because Nucky is getting home at 8AM.    He tells her she looks ravishing and then goes to the office to sleep.

Jimmy Darmody gets home and is having breakfast with his family.  Jimmy asks his son to go shooting gulls but his wife (Angie) thinks he is too young and is afraid he will get hurt.  Jimmy’s Mom interferes and agrees that he should take his son.  Jimmy’s wife is none too pleased.  Mommy Darmody tells his wife when Jimmy was young he use to kiss his winky ughhh.

Over with Agent Van Alden brings his wife to the office to meet people.  His wife is in town to visit and he is taking her to see the sites.

George Remus is negotiating rivalery to the underground liquor business of Nucky.

Nucky is speaking about land that he wants to buy.  He tells Ernie he wants to buy the land and sell it back to New Jersey for tenfold.   He tells the guys once NJ buys the land roads will have to be built and they will build it.  Ernie pays Nucky off to get in on the deal.

A reporter has called and they are claiming Chulky White shot a Klans men of course he did.

Meanwhile Agent Van Alden is taking his wife on a buggy ride around the boardwalk and they pass Nucky.  Van Alden gives a dirty look and his wife asks who it is and Van Alden replies ‘no one of consequence’  Van Alden’s wife get upset the guide to the town shows the places where there are taverns and she tells him maybe they should not bring children into the world.

Nucky asks Eli (Nucky’s brother) what happened he was suppose to have the Klan shit under control.  He tells Nucky that Chalky is one uppity shine.

Margaret stops by the convent she wants to know why her son came home with bruises.  The nun tells Margaret that her son was playing with matches in a closet with a school full of children.  Margaret does not know what to say.  Margaret asks if her son is to be expelled.  The nun replies NO.

Jimmy is pissed because his people killed a woman at the warehouse (Chalkys)  and says 10,000 blacks are up in arms.  Eli Thompson the snake is there to and so is the Commodore.   The commodore says that Eli thinks he has power just because he has a badge and a gun.    The Commodore tells Jimmy now that Chalky is gone the warehouse is there for the picking.  The commodore goes on to brag to Jimmy about all the stuffed animals in his warehouse and how he killer them ughh what a blowhard!!

Nucky is speaking to the coloreds who he says are his friends and his equals tell them they won’t rest until those people who shot the men in the warehouse will be brought in justice.  Over at the white gathering Nucky is telling them the same thing LOL… Two ends against the middle Nucky.  Someone walks in and tells them another Klan member died and Nucky tells his brother Eli to go and arrest Chalky to protect him.

Over with Agent Van Alden they are having dinner and the waiter asks them what they want to drink and implies he can get them alcohol.  His wife is upset and asks if he is going to arrest the waiter.

Jimmy asks how Chalky is and Nucky replies alive which is the main thing is.  Nucky says to Jimmy,  so you run off and get married like a thief in the night.

Nucky asks Jimmy if there is anything he wants to say, he tells Jimmy his father is a very duplicitous man.  Jimmy replies he told his mother he would be over for dinner.

Van Alden (Nelson) tells his wife he got her a gift and he gives her a cameo (really nice)  Nelson asks the waiter for Champagne or Whisky and the waiter says yes.  His wife gasps…. And then Nelson punches the waiter in the mouth and agents come in and arrest everyone.  There are over 200 cases of wine and spirits.  They are tagging and destroying according to Nelson.  Nelson’s wife is very proud of him.

Van Alden(Nelson) and his wife are at his hotel and he tells her the bed is not great.  She tells him that is okay he is very proud of him.

Nelson Van Alden is taking his wife back to the train station to go home and she tells him she could not live her she is glad to go home but she misses him.  He tells her until next month.  So I guess she visits once a month.

Over with Jimmy and his wife, Nucky has sent them a wedding gift.  Jimmy is having breakfast with Richard.  Richard asks Jimmy how it feels to have everything.

Over with Nucky he is visiting Margaret’s son and tells him he wants to talk to him.  Teddy starts to take his pants down he tells Nucky he is getting ready for the belt.  Nucky tells Teddy he is not going to beat him.  He tells him no more misbehaving.  He gives Teddy money and tells him to run around and go to the sweet shop and be a good boy.

Over at Chalky’s warehouse the Commodore’s men are breaking in they want to take over.

Over with Nelson Van Alden he returns to his boarding house to where his mistress Lucy Danzinger he is taking out money that he stole from the till at the place that he arrested.  Lucy is pregnant with his child.

Back over with Nucky the phone rings and it is his butler and he says there is a man from the state’s attorney that wants to talk to him.   Nucky tells her before they go to the pictures he has to stop by the office.

Over with Richard he is cutting pictures out of the newspaper and gluing them in a scrapbook.   They are pictures of happy families.  All he wants is romance and a happy life ahhhh.

Nucky goes to his office and Solomon Bishop a deputy with the States office is there.  They are arresting him for election fraud.  Margaret and Teddy are at the movie waiting for Nucky who of course has not shown up.

Over with Jimmy he is taking down Nucky’s wedding present which he has not opened and in it is a card with lots of money which Jimmy throws on the floor and a bronze statue with two boys hunting together.   The statue is supposed to depict Jimmy and Nucky when they were boys.  He puts it away he feels guilty.