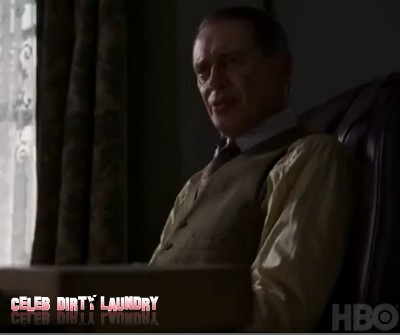 HBO will be back with the tenth episode of Boardwalk Empire next week and it is called ‘Under God’s Power She Flourishes.’  Tonight’s episode  was shocking to say the least.  On this week’s episode with the tourist season approaching The Commode’s cronies were getting into a panic about the strike.  They decide to send in strike breakers which does not work out as they planned.  They decided since fighting did not work with the workers they try to negotiate which does not work either.  Manny Horvitz is not happy with Jimmy and realizes he tried to have him killed the outcome is shocking to say the least.  If you missed tonight’s episode read our official recap here!

In the preview video Jimmy obviously is distraught after what happened to Angela and you hear a voice saying ‘He needs to come home people will get the wrong idea.’  Then we flash over to Nucky asking his lawyer how bad it is and his lawyer tells him, ‘A prudent man might want to get his finances in order.’  Yikes it also looks like Nucky might have found out that Margaret cheated on him.  Nucky bunches someone n0t sure if it is Margaret or Owen.  In another scene we see Jimmy’s mom saying ‘what you did we don’t ever have to mention it again.’  I wonder what that is about.  There is a ton more in the preview video, check it out.

Did you watch last night’s show?  I loved it, how about you?  Only two more episodes to go.   Take a look at the preview video and let us know what you think in the comments below!

“Under God’s Power She Fourishes” will air Sunday December 4th, 2011 on HBO.