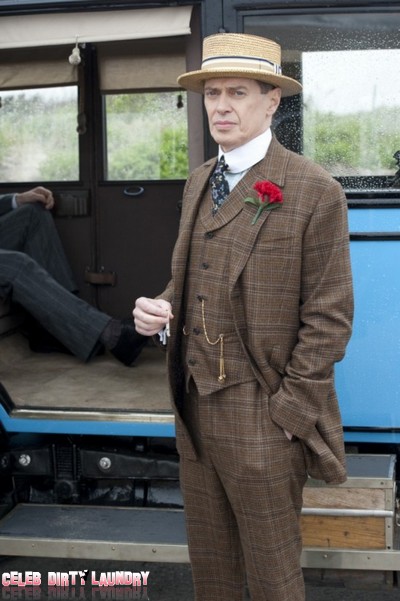 Tonight is the seventh episode of Boardwalk Empire called ‘Peg Of Old.’  On last week’s episode Nucky tried to set up a risky liquor delivery to Philadelphia and unbeknownst to Nucky  it does not work out quite like he planned.  Will Jimmy be successful with his plans?  Lucy Danzinger gave birth to her and Agent Nelson Van Alden’s baby girl but Van Alden gets a surprise in the form of his wife.  Will she accept Lucy’s baby as her own  Jimmy made new allies.  If you missed last week’s episode you can read our official recap here!

Official synopsis: Nucky enlists heavyweight champ Jack Dempsey to promote the wireless broadcast of his upcoming fight. Jimmy faces a decision that could shape the future of Atlantic City. Margaret travels to Brooklyn for a bittersweet reunion with the family she left behind in Ireland. Irked by the arrival of Daugherty’s new federal prosecutor, Esther Randolph, Nelson weighs his options as his personal and professional problems converge. Lucy Danzinger badly in need of support, visits an old flame for a handout.  Owen settles one score, and sets his sights on a new conquest.

The show is really heating up this season with the war between Nucky and Jimmy escalating.  I am still team Nucky, how about you?  This week Margaret goes to have a reunion with her family.  The show has been hinting that perhaps Margaret and Owen might be set to have a romance.  I would rather see her with Nucky than Owen.  It would be nice Margaret and Nucky get married, but perhaps Nicky does not see her as a wife.  How about you?  Would you rather see Margaret with Nucky or Owen?  Sound out in the comments below!

The show opens tonight at the fights with Jack Dempsey training and fighting. He gets out of the ring and asks Nucky how he did. Nucky tells him they are selling the fight over wireless and he asks him to do a promotion for it, wave to girls etc. A reporter asks Nucky what he and the Attorney General talked about at the golf course on Memorial day. Nucky says to Jack show us that hook and he hits and grabs the pushy reporter.

Agent Van Alden shows up at Lucy Danzinger’s place and he asks where the baby is and she tells him sleeping the baby cried for 5 hours today. Lucky asks Van Alden what his wife said. Van Alden tells her his wife went to visit an Aunt and she will not speak to him or answer his letters. Lucy asks what about her – she wants to know about their arrangement and the money he owes her – 3 grand. Van Alden tells her he does not have it as the baby screams. She wants to know when he will have it as the baby continues to scream. She realizes that he scammed her into having the child and he walks out because he cannot listen to the baby screaming. Lucy yells at him that he bought the baby, but didn’t pay

Jimmy is meeting with Lucky and Meyer Lansky, Richard and Al Capone he is telling them that things have changed. Eli is brought in by Jimmy’s Mom and asks why they started without him. Jimmy tells the men that with the Sheriff as a partner there is no limit of what they can do – they liquor they can bring in. They ask him what they will do with Nucky. Jimmy tells him Nucky will go to jail and they will replace him. Eli tells everyone just kill Nucky instead of this creeping around with Lawyers and politicians. Eli tells them he is sick of it just kill him. Harrow asks Eli if he would kill his brother. Jimmy is not visibly not too comfortable with the idea. Al Capone tells him they will get someone to do it – from Chicago. Finally Jimmy agrees and tells them to make their phone call to get the hitman/men to assassinate Nucky.

Van Alden comes to his office and see a women at his desk. The women is on the phone with the Attorney General and she is Daugherty’s prosecutor Esther Randolph. He asks her what she is doing there, she tells him she is the assistant US attorney to prosecute Nucky. He tells Van Alden he will practice discretion when he is in the room with her.

Van Alden tells them they will be eaten alive by Nucky Thompson. Van Alden is not pleased with this incursion into his realm.

Margaret travels to Brooklyn and has a reunion with her family from Ireland. Margaret brings them taffy from the Boardwalk. They asked Margaret to stay for dinner.

Nucky is finding out about the prosecutor on his case is Esther Randolph. Nucky is telling his lawyer that everyone has something to lose not only him. His butler comes in and tells him someone is here to see him. It is Lucy Danzinger and she has brought her baby.  Nucky tells Lucy it is not his. He congratulates her, she tells Nucky she thought to shake him down but knew it would not work. She reminds him that they had good times together.

She tells Nucky she wants to do a good job with her daughter but she needs money. He asks her if she knows who the baby is and she tells him yes she know and so does he.

The prosecutor is interviewing and putting pressure on Nucky’s cronie Alderman Neary about ratting on Nucky. Van Alden gets a call and tells them he has to leave.

Jimmy is with his mother and she is changing and asks him to keep his eyes closed. LOL he asks since when did she get modest.  He tells her she does not get old.

Jimmy asks her if she knows what happens tomorrow. He tells her how someone is going to put a bullet in Nucky’s head because he said so. His mother says the world is going to find out what kind of man they are dealing with.

She tells Jimmy not to let the guys see him being indecisive by changing his mind about killing Nucky. Jimmy tells her he does not want to do this and she tells him it is too late and says ‘make me proud of you.’

Van Alden arrives back at Lucy’s house and he hears someone singing to the baby. Van Alden comes in and it is Frieda Short from downstairs and Lucy has gone out to get ‘formula.’

Van Alden smells something and opens up the phonograph he gave Lucy and there is a soiled diaper on it with the title page of the play she had wanted to act in.

Margaret’s brother’s children ask her about Nucky and she tells them a little. She says goodbye to her family and leaves.

Van Alden is sitting with his daughter and going through biblical names.

Van Alden goes back to the office and asks the Prosecutor if he can speak to her privately. He tells her he is a married man and she says ‘there goes my dreams.’ He tells her his self discipline was compromised and he has a illegitimate daughter. He tell her he is revealing this so she knows he is honest. He gives her a huge and incriminating file on Nucky Thompson that he has kept for 16 months. She asks him why he has been sitting on the information and he blames his superiors. She asks if he will testify and he agrees that he will. She tells him to get his domestic situation sorted out quietly

Margaret meets with her sister and gives her a book ‘The Girl and A Horse and A Dog.’ She tells her to write her back and her sister says they will have a secret correspondence. She asks Margaret what their mother was like. Margaret’s brother shows up and sees the book he sends her away to read. His brother asks if she thinks she can rescue her sister to ease her mind. He gives her back the money and tells her he cannot accept it because he does not know where it has come from. He asks her to go back to her own place and leave them alone.

Nucky comes home and he picks up the phone and calls the Ritz and asks his Butler if he has heard from Owen. When he finds out he has not he asks the Butler to come pick him up.  Meanwhile Owen is at the bar and he sees someone he knows, they talk about the family back home. They toast the stars and stripes together, Owen asks him to have another with him. The man heads to the bathroom and Owen follows him and bars the door. The man sees him coming and they fight. Owen is strangling the man with a garrote. The man’s fingers are caught in the garrote but Owen cuts them off and kills him brutally. We find out the man was a traitor that Owen has been looking for him for five months.

Nucky is at the promotion for the wireless of the big fight and Jack Dempsey is speaking. He tells the crowd he is the heavyweight champion of the world. He is doing a promotion of the fight in Jersey City. Jimmy walks over to Nucky and tells him he wants to talk to him. He says to Nucky it does not make a difference if he is right or wrong, he just has to make a decision. The assassin comes up behind Jimmy and shoots and gets Nucky in the hand. But a large Federal Agent was watching Nucky unbeknown to us and he shoots the assassin saving Nucky and pissing off Jimmy big time! Jimmy exits the hall knowing that Nucky is both alive and aware that Jimmy tried to have him murdered!!

Margaret comes home and looks for the maids Katie and Lillian. Owen is home and hanging around flirtatiously – asks to help her with her bag. He helps her take her suitcase upstairs. Margaret asks Owen why he is not with Nucky. He tells her he had business and she asks him why he is not making an effort to find him.

Owen asks Margaret if he finds the US odd, everything is off, the water and everything. She tells him if he feels that way he should be on the beach with Katie. He tells her if she tells him to leave he will. Margaret tells him to bring the bag up and put it on the bench. She tells him when they are done he will leave and not speak about it. But Owen kisses her and the passion starts and then they have hot and heavy sex.

The show is over for the week.   Loved it again, except my husband and I have a different opinion on the scene with Nucky and Jimmy and the shooting.  He thinks Jimmy was pissed that Nucky was not killed but I think that Jimmy actually saved Nucky’s life and tipped off the agent.  What do you think?  Sound out in the comments below and let us know!

Come back at 9PM tonight when we will be blogging the show live, make sure you refresh your page often for all the hot details.