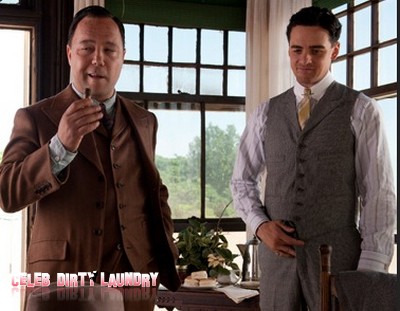 Tonight is the ninth episode of Boardwalk Empire called ‘Battle of the Century.’  Stay tuned as we cover the show with up-to-the-minute details of the show.  On last week’s episode Nucky turns to Arnold Rothstein for political advice after losing his father.  Nucky meets with the Commodore, Jimmy and their cronies and tells them his father’s death and his brush with death have made him realize he should retire.   He tells them they can have it back – Atlantic City and all that goes with it.  If you missed last week’s episode you can read our official recap here!

Official synopsis:  Arriving in Belfast, Nucky and Owen meet with IRA leaders with a barter proposition. Meanwhile, in Atlantic City, Jimmy and his partners broker a deal with George Remus (Glenn Fleshler) for his “medicinal” alcohol before taking a break to see/hear the Dempsey fight. Margaret frets when Emily’s (Josie and Lucy Gallina) illness takes a turn for the worse; Dunn Purnsley (Erik LaRay Harvey) orchestrates a worker’s strike at the Ritz; Waxey Gordon (Nick Sandow) takes action against Manny Horvitz (William Forsythe) in Philadelphia; Randolph and Clifford Lathrop (Curt Bouril) grill Halloran about Nucky’s past.

I am really enjoying Boardwalk Empire this season, are you?  It seems to me Jimmy and his cronies are celebrating too fast.  Eli  know his brother and remains unsure of what he is up to.  Looks like everyone else is making a huge mistake and underestimating Nucky.  Tonight’s episode looks like it is going to be packed full of action.

Tonight’s recap:  We open tonight in Belfast, Ireland as Nucky and Owen arrive. Nucky tells the customs officer that he is back in Ireland to bury his father.

Meanwhile Margaret gets a telegraph to tell her that Nucky has arrived safely in Ireland. Emily’s nanny comes and tells Margaret that her daughter won’t get out of bed to have a bath. Emily tells Margaret that she cannot move her legs. Margaret checks out Emily and asks her to move her toes. Margaret calls to the maid to call the doctor. Oh no, I think she may have polio. Margaret tries to comfort Emily.

George Remus is introduced to Jimmy by Al Capone. Jimmy wants to know about the government bonded alcohol he has to sell. Jimmy asks how they can find out how to find Remus’ truck. Remus wants $300,000 up front and they agree for 5000 cases. Doyle tells them if they do things right it will be worth $3 million. Al Capone, Lucky Luciano and the guys suggest Jimmy pay The Butcher what he owes him. They try to convince Jimmy to come and see the fight in Jersey City, but he is going to listen on the wireless.

Nucky is in Ireland and he is asked what is Dempsey’s prospect by the undertaker. Nucky favors Dempsey. John McGarrigle comes down and says to Nucky it is a long way to come to bury the dead. Nucky opens the coffin and there is no papa Thompson but Thompson submachine guns – Tommy Guns!! Nucky’s donation to the rebellion, 1 dozen with magazines. Nucky tells John there are 3,000 sitting in the armory back in AC. John asks what he wants and Nucky tells him Irish whiskey. John tells him in disgust he has to discuss it with the others and Nucky will be sent word. Nucky asks Owen what it was about -why is McGarrigle such a prick.

At the funeral of Nucky’s brother Eli is there as they lay his father to rest. Nucky is of course not there but agent Clifford who saved Nucky is watching!

The doctor comes to visit Emily and she cannot move her legs or feet. The doctor asks Margaret if her son Teddy sleeps in the room too. Margaret replies yes, the doctor ask her to remove Teddy from the room. Margaret asks if it is Polio and the doctor does not want to speculate but he wants to quarantine Emily at the children’s hospital.

In the kitchen the workers are having lunch. Dunn Purnsley asks the person who served the food to him why he is feeding him dog food. He tells the other workers they are not good enough to eat what the white people put in the trash. He is trying to make the workers unhappy. The owner tells Dunn if he does not shut up he will be fired.

The doctor is doing a painful spinal tap on Emily to determine whether she has polio.

The prosecutor (Randolph) is in bed and she asks the agent (Clifford) who saved Nucky if Nucky seems like a murderer. She does not understand why someone tried to kill Nucky and he just makes jokes. Clifford and Randolph are lovers.

Clifford tells Randolph that he went to Nucky Thompson’s father’s funeral. Esther Randolph sent Nucky to Ireland to bury his father so they are wondering who they buried. They don’t know about the guns!

Meanwhile, in Ireland Nucky is demonstrating how well the Thompson guns works. They ask him how he manages to have so many guns. He tells them they are American made and he is an American.

John McGarrigle comes to tell them that the English have offered a truce. The other men are upset because they agreed to fight to the bitter end.   John tells them he will keep fighting if he must, he will make peace if it is wise.

Jimmy is talking to Richard, Richard is upset he asks Jimmy if he is his friend and Jimmy says he is.  Richards asks why he made fun of him.   Waxy Gordon shows up and they both agree they hate the butcher, Manny.  Jimmy tells Waxy that Manny shot his men.  He says last time he dealt with Nucky, Jimmy assures him he will treat him right.  Waxy tells Jimmy that the butcher Manny is a dead man and asks Jimmy if it is a problem.  Jimmy tells him NO.

Margaret is taking everything out of the child’s room and Katie the maid is burning everything.  One of the maids Holly leaves the house with her suitcase and tells Margaret she has her own children to worry about.

Owen, Nucky and one of the Irish men gives Nucky a sample of Irish whiskey.   They are in a cellar and it is all filled with whiskey.  Nucky asks him if he will give him 10,000 cases of whiskey on consignment.  The man tells him if there is peace he has no need to sell so Nucky will have to wait.

Esther Randolph is meeting with Deputy Hallor and Clifford asks why Eli is not there.  He tells them that Eli’s father died.  They ask the Deputy why Eli demoted him from Sheriff – Deputy says it was Nucky – ‘he’s the boss.’    Esther asks him about a domestic disturbance they went to for Hans Peter Shroeder.  He tells them he cannot remember he has to check the files.  They assure him they are not after him but after the people who boss him around.  He tells them he does not have to sit there if he does not want to.  They tell him they will be sure to tell Eli he stood up for him.

John McGarrigle and Nucky are having dinner together and John asks if he really has the guns. Nucky asks John what the British has given them. John asks Nucky if he cares about the cause and the thousands of men who will die from the guns. Nucky gets upset and gets up and leaves. John asks Owen what is his business with Nucky. Owen tells John he has gone about his work. John thinks Owen has changed but he think he is smart and wants him with him. Owen tells John he will serve as needed.

Over with Manny the butcher he is counting his money when someone comes to the door. He opens the door and someone comes with a sawed off shotgun and shoots him. The butcher is tough and puts his hand out and grabs a cleaver and puts in in Waxy’s main mans head. The butcher searches him and finds matches in the dead man’s pocket from Atlantic City.

In the kitchen Dunn is stirring up the employees again when the boss comes in – he complains and the owner fires him. Dunn tells him they all want a raise. The owner starts ordering everyone around and tells them they have five seconds and the employees start throwing dishes and smashing everything. A labour uprising. The workers have had enough! It’s OWS AC style.

Nucky is leaving Ireland and thanks the person he stayed with for his hospitality. John wishes him a nice trip and tells him he will land on his feet. Nucky tells him he is not so sure. When Nucky gets in the car Owen is not with him.  Owen is staying with John.  As Nucky drives away he hears 2 gunshots and they have killed McGarrigle. The man in the car with Nucky tells him you will deal with me now. 1,000 Tommy guns for 10,000 cases of Irish Whiskey. There will be no peace – the IRA’s militant wing – the hardliners want the guns and they were willing to kill John who wanted peace.

Over at the Dempsey fight, Jimmy is listening to it on the wireless and someone sends him a note that says they are watching him closely.

At the hospital all the employees are listening to the fight on the radio while Margaret sites by herself and waits for news on Emily.  No one is watching so even though Emily is under quarantine she goes into the quarantine ward and lies down with Emily.

A bunch of sleazy women come and sit around Jimmy and one tells him everyone knows who the new King is and she grabs him and kisses him.  She pulls back and looks at Richard and Jimmy tells her Richard is with him.  She goes over to sit next to Richard.  Richard is finally getting a girl!

Nucky asks Owen how long has he know McGarrigle, he tells them since he was 15.  Nucky asks if he knew what they were going to do to McGarrigle and Owen tells Nucky he got what he wanted and Owen tells him he does not live in Ireland anymore.  Nucky is not too pleased that Owen didn’t warn him that John was getting wacked and one can see that Nucky realizes that Owen is fat snake.  Which of course he is – having already slept  with Nucky’s Margaret.

Owen tells him he got a telegraph from Margaret that Emily has polio.  Nucky looks upset.  The other telegram tells him that they got his court date.
Dempsey wins the fight… .
That is it for this week, what did you think of the show?  Sound out in the comments below!