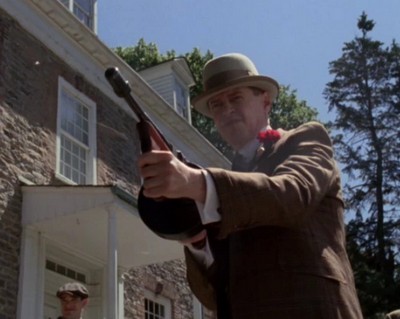 HBO will be back with the ninth episode of Boardwalk Empire next week and it is called ‘Battle of the Century.’   On tonight’s episode Nucky takes political advice from Arnold Rothstein and decides to step down and retire.  Nucky tells Jimmy, The Commodore, Jimmy’s mom and one of his cronies he is stepping down and they can do what they want with Atlantic City.  Of course they all believe Nucky and proceed to have a big celebration.  Big mistake underestimating Nucky :-)  If you missed tonight’s episode you can read our official recap here!

Official synopsis:  Arriving in Belfast, Nucky and Owen meet with IRA leaders with a barter proposition. Meanwhile, in Atlantic City, Jimmy and his partners broker a deal with George Remus (Glenn Fleshler) for his “medicinal” alcohol before taking a break to see/hear the Dempsey fight. Margaret frets when Emily’s (Josie and Lucy Gallina) illness takes a turn for the worse; Dunn Purnsley (Erik LaRay Harvey) orchestrates a worker’s strike at the Ritz; Waxey Gordon (Nick Sandow) takes action against Manny Horvitz (William Forsythe) in Philadelphia; Randolph and Clifford Lathrop (Curt Bouril) grill Halloran about Nucky’s past.

In the opening of the preview Al Capone has set up a meeting with Jimmy and a man he can buy whisky from and Jimmy is told it will cost him.  Meanwhile, Nucky has headed to Ireland to see John McGarrigle and in the preview he says to John, “Can you really afford to send me back empty handed?” to which John replies, “That’s a risk I’m willing to take!”  Next we see Nucky speaking to Owen and he says, “I don’t like secrets.”  Yikes wonder what that is about?  It also looks like Chalky is about to get the strike organized.  There is so much happening, so fast you have to watch it!  The last scene is Nucky with a tommy gun shooting!