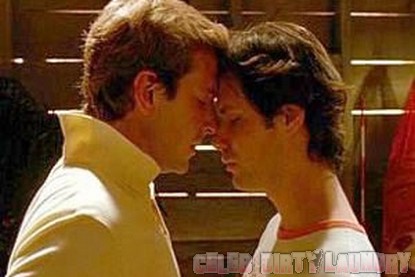 When promoting a new movie, all bets are off when it comes to old news — just ask Paris Hilton. Now, in order to promote The Hangover 2, Bradley Cooper is talking about an old flick.

In 2001, he starred in a movie called Wet Hot American Summer, where he engaged in some gay sex. Don’t wonder why you haven’t heard of this movie, it was a commercial flop. The movie only earned $295,000 in the U.S., but has since become a cult favorite.

He played a character named Ben, opposite Michael Ian Black, who make out together in a shed. In a new interview with Esquire, he talked about the racy scene. He said, “I remember saying, ‘What if we wear tube socks, and I’ll go up on the wall, and you’ll come from behind me.’ And I said in the scene, ‘Say my name’, and Michael says, ‘Ben!’ and I say, ‘No! Say my Christian name’, and he whispers, ‘Benjamin’, and that’s when I came.”

I’d show you the video, but it’s a tad racy. You can check out the scene in question here.

What people do in the name of promotion!