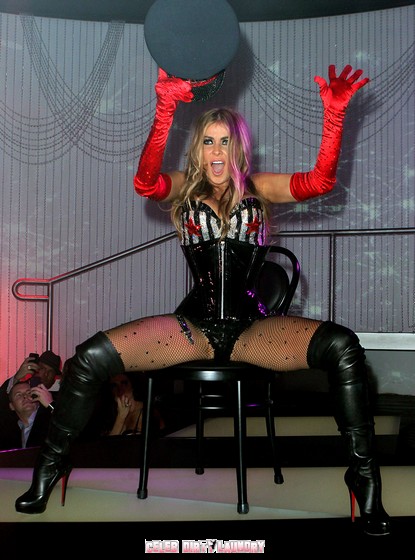 Actress and model Carmen Electra, 39, stripped it off as she performed a burlesque routine live and hosting the Grand Opening of Pussycat Dolls Burlesque Saloon at Planet Hollywood Resort and Casino in Las Vegas, Nevada June 4th, 2011.

Also at the opening was choreographer Robin Antin who founded the Pussycat Dolls in 1995.  Carmen was one of the original members of the Pussycat Dolls (who was the group’s lead performer for many of their shows).  When the Dolls evolved into a musical group Carmen did not join them she said,  “I was part of [The Dolls] for over two years and did every show with them but financially, I couldn’t become part of their new music project.  It was a sacrifice I couldn’t make.”

Robin said about having Carmen at the opening,  “Carmen is synonymous with sex appeal.  She’s an amazing dancer and performer, and we’re thrilled she’s our special guest entertainer for the grand opening.”

“She is going to be sensational. Carmen has everything you need for a fabulous opening night, and she is going to wow everybody with her show.”

Click on the thumbnails below to see 25 more SIZZLING photos of Carmen performing.  Enjoy!