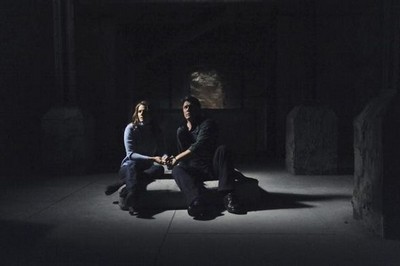 An all new episode of Castle airs Monday December 5th on ABC and the 10th episode is called ‘Cuffed.’   We have three preview videos and some pictures of the episode for your enjoyment!   On last week’s episode of Castle a sniper goes on a murder rampage in the city and police struggle to find a motive before time runs out and another victim is killed. Meanwhile, Becket’s PTSD symptoms are escalating, even though she tries to hide it from the rest of the team.  If you missed the episode you can read our official recap here!

Official Synopsis: CASTLE Season 4 Episode 10 : CASTLE – “Cuffed” – When Castle and Beckett wake up in bed, handcuffed together, in a locked room with no memory of how they got there, they must piece together the mystery of where they are and why, all while trying to escape. But as the two of them adjust to being shackled together, what’s the biggest threat they face… the people who abducted them or each other? Meanwhile, Ryan, Esposito and Gates are left to investigate their disappearance in a case where all is not what it seems, on “Castle,” MONDAY, DECEMBER 5 (10:01-11:00 p.m., ET), on the ABC Television Network.

Now what’s more exciting than finding out that Castle and Beckett will spend an entire episode handcuffed together?  Finding out how they got chained up in the first place.  Take a look at the preview videos and let us know what you think in the comments below!