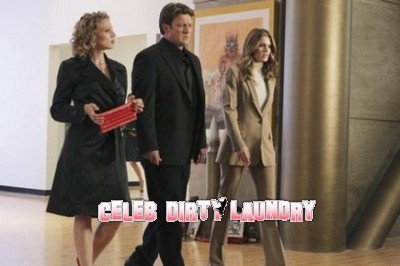 On tonight’s episode of Castle, we’ll see Kate Beckett getting upset and/or jealous of Rick Castle’s new love interest, Serena Kaye, who is played by Kristin Lehman.   If you missed last week’s

Kate obviously has feelings for Rick and for some reason, she doesn’t want to show it. She also knows exactly how Rick feels about her. So what’s going to happen when they add a new lady friend into the mix? How long will his relationship with Serena last? The writers on the show have not released the guest cast list for any of the upcoming episodes, so we’re wondering how permanent Serena is going to be?

We do know that Kate will once again be talking to her therapist, Dr. Carter Burke, as played by Michael Dorn. (ST: TNG nod nod wink wink)

Perhaps she’s struggling with the image of them kissing, in her head? She could take a leap and just tell him that she knows how he feels and that she feels the same! What do you think?

The show opened with a thief taking a valuable money sculpture from a museum. Afterward, the show cut to an art gallery. An assistant is walking into the back of the gallery and notices a bloody corpse nailed to a sculpture.

Afterward, we see Rick, talking to his mother. She’s trying to convince him to go to her acting class and wants to fix him up with a girl there. She said all he’s been doing is writing and working with Beckett.  She wants to know if he has a reason for not putting himself out there.