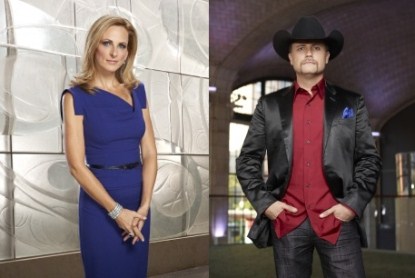 This week our Celebrity Apprentice recap is brought to use by Rosie from Fit Fab Celeb.  Take it away Rosie….  The men are riding high after winning three in a row. Nene Leakes came out of the boardroom with guns blazing because Dionne Warwick was rude as she left and got the last word calling Nene a coward.

Donald Trump calls everyone back in the boardroom and tells them the next task begins right away. Their new task is to create and sell their own art work; they will both have their own galleries at their disposal.  The teams also have to design seven different ball caps for charity.  John Rich is the Project Manager for BackBone and Marlee Maitlin for ASAP.   The women better pull it together and find a way to work as a team or they will find themselves back in the boardroom again.

BackBone:   John tells everyone to pull out their Rolodex.  Later that night, Jose Canseco received bad news from home regarding his father and has to leave the show. Trump generously tells him that he will give $25,000.00 to his charity, BAT which assists minor league players with medical needs.  The men head over to Michaels Craft store and Gary Busey is getting on Meatloaf’s nerves. They get to the studio and Meatloaf is miffed that his paint supplies are missing and the guy literally snaps because Gary has his supplies!  Meatloaf repeatedly shouts, “you don’t want to fuck with me”.   The other members of BackBone have to hold Meatloaf back from attacking Gary who just stands there and stares.  Richard Hatch designs one of the caps and Lil’ Jon calls it a gay ass cap. George visits ASAP for Trump and find the men are on track, although if the art will sell, beauty is in the eye of the beholder – we will see. The men are all finished their set up and Lil’ Jon and Mark McGrath pop over to the women’s gallery and find that they haven’t even arrived for setup. Meatloaf apologizes to Gary, tells him that he was totally wrong and should never have reacted the way he did. The men are all fired up and excited to open the doors. A girl arrives with $5,000.00 cash from country star Trace Atkins, which gets the ball rolling for donations. Star Jones stays by the credit card machine to accept donations outside the gallery while munching on caviar. John announces that the guitar sold for $470,000.00.

ASAP:   Marlee starts by telling everyone that there is no more room for backstabbing, everyone needs to act like an adult and get this task done.   Latoya Jackson offers up a shirt signed by her brother, there is only two in the world and she is willing to give it to Marlee to raise money because she said that Michael would have wanted it that way.  The team decides to do a print of all their hands on a canvass and Star Jones almost has a heart attack because she has to get her hand dirty!   Donald Jr. comes by for a visit and Star tells him that the task is nerve wrecking, he finds the group to be very down in the dumps and tells them to do something about it.   Marlee asked if anyone else has bothered to get donations and nobody really gives her answer except of NeNe who tells her not to expect any from her.   The women got a late departure off to the gallery; old traffic issues that haunted them during the pizza challenge earlier this season come back with a vengeance and threaten to leave them no art to sell as the show begins. The women arrive at the gallery to find that the art has not arrived and it is 15 minutes before the gallery is supposed to open for the Silent Auction. People are waiting outside the doors, the women have to open up but they are not ready. Somehow, everything starts to fall into place, more and more start coming into the gallery and the money starts to roll in.   Marlee announces that Latoya’s t-shirt got $99,000.00.

Trump announces that they have never raised this much money in the history of the show in an entire season much less a single episode.

Trump asks both Project Managers why their charities are important to them and then tells them that he is prepared to make a deal, the losing team, if they both agree, will keep the money they raised for their own charity, both agree to it.

Trump asks everyone to remain in the boardroom and asks the women that since Jose Conseco went home, should he still send one of the men home, or should everyone stay since both teams did so well with the charity.

Marlee tells Trump that her heart goes out to Jose, but business is business and someone should be fired. Ok, Trump obliges and actually let’s them stay in the boardroom to watch one of the men be fired.

The men narrow it down to Richard having collected the least amount of money and when Trump asks the women who should be fired, they say Richard.

Trump asks the men who their weakest link is and all the men say Gary. He then goes back to Marlee and asks her, she says without a question she would fire Richard.

Fired this week is Richard Hatch