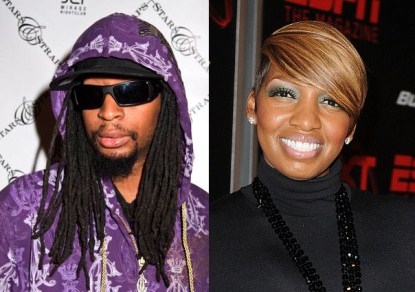 This week our Celebrity Apprentice recap is brought to use by Rosie from Fit Fab Celeb.  Take it away Rosie….Did anyone else notice that during last week’s cat fight between NeNe Leakes and Star Jones a lot of the other celebs are kept quiet and stayed under the radar, good choice. Let these two get themselves thrown out, I am tired of them, how about you?

It’s nothing personal, it’s just business, another celebrity will be fired!

The teams meet at Trump tower for the next challenge. Executives for ACN Inc, a multi-level marketing (MLM) company were there to explain the challenge which is a 30 second commercial that showcases their new video phone. The teams have to present the commercial to 450 ACN  independent leaders. NeNe Leakes jumps in to be project manager for ASAP and Lil’ Jon for BackBone. The winning project manager will win $40,000.00 for their charity.

At ASAP: The ACN executives tell the women not to focus on the function, focus on the emotion. Dionne Warwick and Hope Dworacyzk go to the Prop House. The rest of the team go do auditions for the commercial. NeNe Leakes tells Marlee Maitlin and Star Jones that Latoya Jackson was basically useless. The commercial is about two locations; Paris France and America, where a parent and child talk to each other long distance on the phone. Dionne Warwick gets bossy with Marlee Maitlin over the placement of the furniture. The women start filming the commercial, Dionne Warwick acts as the host mother in France and Marlee Maitlin acts as the mother in America. Filming is finished, the team heads over to editing, they have two hours left to finish the task and Dionne Warwick decides to leave and go to bed! Donald Jr. stops by for a visit asks where Dionne is, NeNe Leakes tells him that she just left and it’s done, she’s o.k. with it. The ladies head over to the Millennium hotel to present their commercial. NeNe Leakes starts practicing the intro and Star Jones calls her too sexy, is she kidding? Leakes doesn’t have a sexy bone in her body. ASAP presents their commercial and the audience seem to love it!

At BackBone: The men meet with the executives of ACN and Lil’ Jon jumps right in and asks questions. Jose Conseco asks the executives if they can incorporate aliens into the commercial? This guy is a complete idiot! Lil’ Jon wants to incorporate humor with suggesting that two men are getting married to each other and John Rich is against it, he thinks it is too far over the edge for ACN. Richard Hatch and Mark McGrath go to the Prop House and brought back a pink couch that Lil’ Jon hated. Lil’ Jon and Meatloaf start the directing and Gary Busey keeps meddling in. The men are doing great, Jose Canseco is the gay fiancé and Gary Busey acts as a grandfather. Ivanka Trump visits the men and they don’t tell her the pitch, they want to keep it a surprise; she said that was fine as long as there was no frontal nudity! BackBone present their commercial and the audience break our cheering and clapping!

ACN executives meet with Donald Trump and tell him that the employees loved both commercials and were very upset that somebody had to lose.

Back at the boardroom, the men were confident that they won. Richard Hatch tells Trump that Lil’ Jon was an amazing Project Manager. Trump asks if anyone found the commercial was a little too risky and John Rich doesn’t come up to the plate and tell him what he was thinking. Trump acknowledges that from a viral standpoint, the video was fantastic. Ivanka says that the team had amazing harmony. NeNe Leakes starts to cry for some unknown reason. Dionne Warwick tells Trump that Nene Leakes was fantastic as a Project Manager. Trump says that ACN loved the emotional part of the commercial. NeNe Leakes tells Trump that she was crying because she doesn’t want to lose, they did a good job and she wants to give the money to her charity. Trump asks Dionne Warwick why she left the task, she said that she left because she had NeNe Leakes permission. Trump asks Star Jones who was the weakest player and she offers up Hope and Latoya.